The family bed (aka my wild and crazy night life) 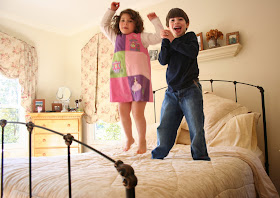 "THWACK!" That's the sound Max's hand makes when he flails an arm in his sleep and hits my face in the middle of the night. All four of us are in one bed. One queen bed.
"AARGH!" That's the sound I usually make. "Hon, he didn't mean it," Dave will mumble, sleepily. Just once, I'd like Max to whack Dave (I'm quite sure Dave would say "AARGH!" too), but for some reason it's always me Max gets.
My two kids have been in our bed, on and off, since they were born. It started when we brought Max home from the hospital after two weeks in the NICU. He'd had seizures on the second day of his life, how doctors knew something was up, and I was scared to let him sleep by himself. What if the seizures returned? I still remember lying in the darkness, one hand covering his little body to make sure there were no weird twitches or movements.
I know it's time to kick the kids out of bed (old Ferber is turning over in his grave as I type this, I'm sure). I'm just weak. WEAK. I'm not up for the nights of wailing that will ensue if we put them to sleep in their rooms. (BTW, they willingly go to sleep in their own beds for the babysitter; they sweetly do it for my mom and sister, Judy; they would go to sleep in their own beds for anyone who walked in off the street and did it. They just won't do it for us.)
So, that's how sleeping goes at our house. How about at yours?
Ellen Seidman at 9:03 PM