Max shows us how to swim 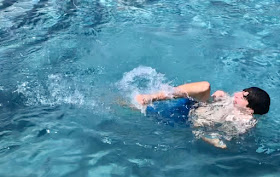 When Max was a tot and people asked if he was doing stuff other babies did—saying sounds, pulling to stand—I'd say "no" as calmly as I could, even as I was crumbling inside. As Max got older and I gained hope, I started saying "No, not yet." Because although the stroke had done a number on his brain, my little love had eyes full of brightness and plenty of potential and his whole life ahead of him. Sure, I wanted him to be able to do stuff sooner rather than later. But as I came to realize, Max was operating on his own timeline and nobody else's.
When my development as a parent progressed, I learned something else: acceptance. Max wasn't going to do everything his peers did, and that was OK. Or, he would do things his own way and that was amazing, too. He would talk in his own way, hold a spoon and a pen in his own way, dance in his own way, do it all in his own way.

Of course, every person on this planet does stuff in their unique way but understanding that your child with disabilities will do that is part of the journey of being the parent of a child with disabilities. Until you understand and accept that your child may not look, sound or behave in the so-called typical way, you will never fully stop grieving the child you thought you were going to have and appreciate the child you got. Only then will you start considering your child's movements, sounds and thinking part of their uniqueness, not defaults for perfection. I honestly can't imagine a Max who walks or talks any other way. And as of last week, I can't imagine a Max who swims any other way.
We were at our last stop on our RV trip, Hershey Road Campground. Max isn't usually a pool person but it was a beautiful new pool, it was hot outside and there wasn't much else to do. So, pool it was. I arrived late because we'd forgotten our towels and there was Max, swimming in the shallow end of the pool. He'd float for a few seconds on his back, then he'd turn over and walk while waving his arms then do it all over again.
It was mind-blowing to see Max swimming. This was definitely one of those things I'd figured he wouldn't be able to do—there is so much coordination involved, and his arms don't move that freely, especially his right one. But there he was, having the time of his life. Not only that, but my boy Max decided he was going to make another splash with some rather graceful back-flops.
If you're the mom of a little person with cerebral palsy, you may wonder when the developments will end. I am here to say that there is no expiration date for milestones. Max is going to be 18 in a few months. And last week, he wowed us with his swimming. And you bet he did it his way.
Ellen Seidman at 11:08 AM