I won't always be there when he falls, and that's just the way it is 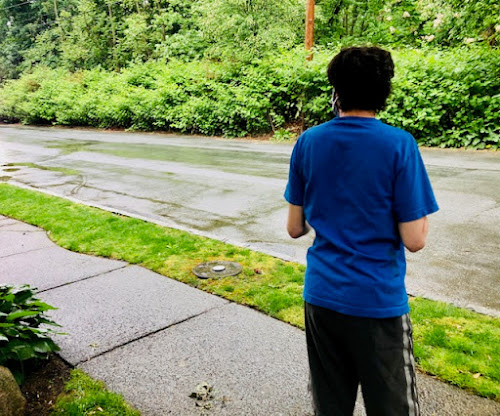 Max likes to take long walks around the neighborhood, often after dinner. Along the way, many neighbors say hi to him and keep an eye on him, as I've been told. Max also wears an Apple Watch and I can track him or call him as need be, so I've grown comfortable with this arrangement, and Max thrives on the independence.
Last night, I had to run and pick up something from a friend's porch. I buckled Ben in the car and went off to find Max to see if he wanted to come. I spotted him crossing a street and as I neared, he stepped onto a curb and fall down on a patch of grass. Max scrambled to his feet, then saw me headed toward him.

"Yes!" he said, and basically waved me off.
"Did you want to come for a drive?" I asked.
"No thank you!" he said, and ambled off. His knees weren't bruised and his walking was fine, so I let him go.
It was terrifying to see him fall. The street happened to be empty and if I hadn't been there, nobody would have seen it or asked if he was OK. And what if he'd fallen on concrete and really hurt himself?

My mind cycled through the scenarios.
If he'd fallen and not been able to get up, someone would have eventually seen him—our neighborhood is a busy one—and let me know. If he was able to do so, he would have known to call me or Dave from his watch.
If it was someone passing by who didn't know Max and saw him lying there, hurt, would they have understood him when he told us our address? Maybe, maybe not. If not, they might have called the police. And what if a Bad Person driving by saw Max, incapacitated?
If the police would have come, would they have understood him when he said his address? By that point, would someone have shown up who knew him? And what if an ambulance was necessary?

It was like a twisted form of that book If You Give a Mouse a Cookie. My brain was in total freakout mode.
A few minutes after Ben and I returned from our errand, Max walked in.
"Did you have a good walk?" I asked.
"Yesssss," he said.
"You're sure you didn't get hurt?" I asked.
"No!" he said, and flashed me a grin.
Later, we talked more and I made it clear that if if he fell again and he got hurt and he was alone, he should call me or Dave. The truth is, Max is going to fall on occasion—curbs and uneven pavement are a longtime hazard—and we have to accept that. This is going to be true of many parts of Max's life as he gets older, and we'll have to figure out ways to enable and help him. We're going to find a spot on his phone where we can program in our address, so he can show it to someone if need be—he's proficient at navigating the screen.
Soon enough, he headed down to the basement his Max cave to watch TV. He was struggling to open the basement door.
"Max can do it!" Ben announced.
Sure enough, he did.
Ellen Seidman at 12:58 PM