A visit to Brooklyn 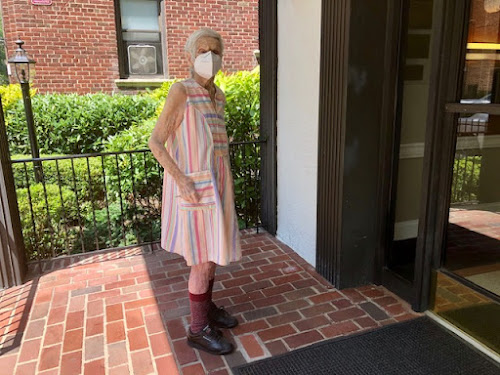 I visited my mom this weekend for the first time in nearly four months. She lives in Brooklyn in an apartment building we moved to when I was 12. It's an old-school building—no doorman, just a glass door with a lock, a lobby that doesn't try too hard or try at all, and six floors of apartments with hallways painted Depressing Beige. I found a parking spot (each time, it's like a miracle) and walked the empty street to my mom's. Not surprisingly, the gaggle of senior citizens who usually sit outside the entry in folding chairs weren't there.

Mom was, as usual, wearing one of her housedresses. Vintage, some might call them, as most have been around since I was a kid. I'd brought her 2020 tributes of love: a bottle of Clorox spray, masks and disinfecting wipes. She is one of the more selfless people of the world and inevitably she said, "Ellen, keep them for yourself! You'll need them" So when she wasn't looking, I stuck them in the cabinet beneath the kitchen sink. I cleaned the kitchen and her bathroom and tossed the expired food and plastic utensils she insists on reusing.

We sat on the sofa and talked about her grandkids, life, politics and the weirdness of the pandemic. My mom was born the year of the Great Depression, and we discussed how her parents had survived the 1918 flu pandemic. "My mother was the most wonderful person," she said. "I'm not nearly as good as she was!" Which was funny, because I think my mother is the nicest person I have ever known and I that I fall far short of her. She told me how her mom used to volunteer at The Brooklyn Home for Infants, an orphanage, which I hadn't known.
I asked my mom to make a video for the kids. She spoke, as she always does, with so much warmth and care: "Guess what? I love each and every one of you, collectively and individually....I send you a zillion trillion kisses." I cried as she spoke but she couldn't see it behind my mask.

Mom was hesitant to go outside—it was a hot day—but she hadn't seen sunlight in a while and I thought it would be good for her. She eventually agreed. We put on masks, rode the elevator and she gingerly walked the five steps down to the lobby, making me painfully aware of how frail she's getting. Mom stood on the building's brick stoop, where she greeted everyone who walked through the doors. It's a pretty communal place, and the management treats tenants pretty well. A few weeks ago, everyone found a couple of tickets in their mailboxes to use at an ice-cream truck management had hired; it showed up on a Sunday and people stood at a distance and got their treats. Mom didn't go.

A guy walked in who I hadn't seen in years. I thought his name was Milton but if not, it was a good guess for an older guy living in an apartment in the middle of Brooklyn. We got around to the subject of masks, and he said he'd been wearing the K95 on his face since since March and the other day he'd walked 15 miles to a doctor's appointment—!!!—and it had started raining but he shielded the mask with a magazine. I mentioned that he needed a new one because there was only so many times that you could reuse a K95, then he peppered me with questions about masks until I politely said I was no expert.

"Ah, she's so modest, my daughter is highly intelligent!" said my mom, because: MOM. If she only knew that as we were speaking, the only thing I kept thinking was: At what point do men grow ear hair? No matter. Nobody on this earth will ever love you like your mom loves you.

After a few minutes, we went back inside and my mom slowly climbed the five steps back up to the elevator landing, leaning on my arm. We noticed a box sitting on a windowsill that had "Gloria" scrawled on it and realized that it was a food delivery for her.

I pressed the elevator button with a gloved hand but the car was stuck on "B." I have always been terrified of basements in apartment buildings. The one I grew up in had an ancient dark one, and I have a vaguely horrifying memory of the furnace and an open door where you could see fire roaring.

When the elevator didn't arrive after a few minutes, I rang the superintendent's buzzer. No response. I called my sister, Judy, and asked her to give him a call. Then a woman walked by who said she'd been in the basement doing laundry and the elevator was stuck. My mom had to climb four flights of stairs. She didn't complain once, but looked pale and drawn by the time we got back to her apartment. She rested on the couch and I got her water. As I unpacked her food, she asked if I wanted to take any home. Mom!!!

I puttered around a bit more. I threw out a dusty box for a clock sitting on a table (my dad was a big proponent of keeping the boxes stuff came in) and a stash of empty plastic water bottles and admired an old chubalicious baby picture of Judy. I realized the air conditioner filter hadn't been changed since forever and ordered one. My mom urged me to get home in time for dinner. I made sure her meal was set, kissed the top of her head with my mask still on and headed out.
Ellen Seidman at 8:24 AM