When William Aronow was a little guy, his father, Richard, had a dream of creating a school for autistic children like his son. Richard was the deputy chief of the Port Authority's law department and on 9/11, he was working on the 84th floor of the World Trade Center's North Tower when the plane attack started. He did not survive. William was 4 at the time.


Yesterday morning, at work, I clicked onto the 9/11 memorial service and started weeping. A few minutes later my friend Wendy texted me a video she'd taken earlier on in the service; she thought I'd want to see it. I watched as a young man used a speech app on his iPad to articulate the names of people who died on 9/11 and to pay tribute to his father. That young man was William, now 22. Suddenly, I wasn't crying. I was floored and awed by the poise of this young man and the power of augmentative communication, which has also given my Max a voice.


I'd later find out that the woman holding the iPad was his mom, Laura Ann Weinberg. She became a speech therapist. She shared her pride for her son on her Facebook page: "He has been using touchscreen voice output devices since 2011 and gets better at it every year. He practiced and said what he wanted to say!" Laura also spoke of the challenges she'd encountered early on getting William an AAC device. "He didn't qualify for a voice output device for 6 years during which I knew he was at least partially literate. He'd find calamari on a menu and show it to the waiter!" And now, she noted, "technology has finally caught up with our son, and he has a real voice."

I shared the video on Facebook, and it was clear from the comments that, like me, many parents of children with disabilities as well as teachers and speech therapists were so, so proud of William, too. Some noted the extreme control he'd shown on stage, in front of the large crowd. "To some, you might just see a young man standing there, but to an autism parent we see more than you can imagine. I see a young man full of courage working through his anxiety and looking up at his uncle because he was proud of himself," said New Jersey mom Nikki Goldywn. "Every year I see something new from 9/11 that breaks my heart a little more," said Dayna Liebman, a woman in Florida studying to become a speech pathologist. "For the first time I've found something to smile about while honoring all of the lives lost too soon."

On the most somber day of the year, the names of the deceased streaming out of William's iPad were as potently articulated as any. His words to his father—"I love you very much" and "I miss you"—were as emotional and moving as any. William's presence on stage sent a message: People with disabilities should be included in every aspect of life—grieving, too. His use of his speech app also spoke volumes. William was there to commemorate the dad he loved and lost, but in doing so, he showed the world that voices come in all forms.

RIP, Richard Avery Aronow. I hope your son's voice made its way to you. 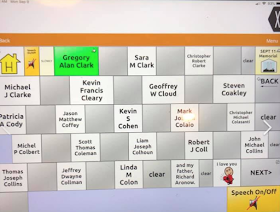