We all make igloos for our children 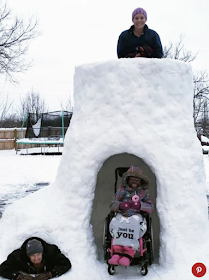 I saw the viral photos over the weekend of that cool wheelchair-accessible snow fort built by two parents in Cincinatti, Ohio. Gregg and Sarah Eichhorn have nine children with disabilities and medical needs, all adopted. When snow fell the other weekend, Gregg and his brood discussed making it accessible to Elijah, 11, and Zarah, 19, who use wheelchairs. The parents went to work packing snow with some help from their kids and five hours later, they had an adaptive fort. That's them above with Zarah.


It is not every day that someone builds a gigantic snow fort like this for their kids, so props to the Eichhorns for that. My best snow-building feat to date has been posing a snowman to look like he was taking a selfie with Sabrina's phone. But America seemed to think it was mind-boggling amazing that the couple made the fort accessible for their children. Thing is, that's what parents of children with disabilities do every single day: we carve out ways for them to enjoy what their peers do. "I keep telling everybody, it's really no big deal," Gregg Eichhorn told People.

We don't do this stuff because we are heroes, but because we are parents, these are our children and they deserve equal access to childhood and adolescence. And so we wrap modeling clay around a crayon so our child can better grasp it, put the noise-blocking headphones on so a performance won't unsettle them, build Halloween costumes that include their wheelchairs, load knock-knock jokes and fart sounds onto their iPad speech apps, sit behind them on the merry-go-round for support. When people aren't willing to include our children in activities and programs, we push to get them in.

I'm just not sure that's what people get from viral videos like this. They see parents or other people accommodating and delighting young people with disabilities (I'm thinking of that video of a 10-year-old boy in a wheelchair swing) and that "awwww" reflex kicks in. It's "heartwarming," the news reports proclaim, exactly why the masses love these videos. But our children and teens are not creatures who are being coddled or treated with astounding amounts of TLC—they have a basic human right to be included in snowfall fun and all that life has to offer.

We parents will keep right on making those igloos and forging paths and building bridges and climbing mountains for our children. And it would be so great if people got the reason why.