It takes a special needs parents to change the world 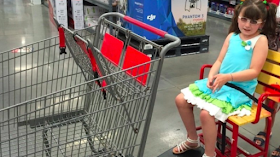 Last weekend, I got a notice about a new change.org petition. Cynthia DeStefano, who has a daughter with disabilities was asking Costco to get Caroline's Cart, a modified shopping cart that comfortably fits and supports those with disabilities up to 250 pounds. The cart was invented by two parents whose daughter, Caroline, has special needs. 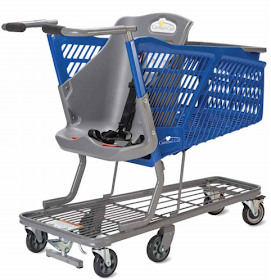 Kroger's and other supermarkets have them; Target got them a couple of years ago, after a Target team member who has a child with special needs suggested it to Store Operations. (Here's a pre-written letter if you'd like to contact your store about getting one.)

"Taking Gia out with me means so much," writes Cynthia on her petition. "When stores make that easier, it means I never have to exclude her. Something as simple as these modified carts makes a world of difference to special needs families." She noted, too, that Costco's adoption of these carts would encourage more big-box stores to do the same.

As I signed the petition, I had two reactions:

1) I am continuously amazed by the power of the web and the power of parents to make life better for our children.

I mean, shouldn't it be stores' jobs to ensure that customers of all abilities can comfortably shop there? This is not feasible when you're trying to simultaneously wheel a shopping cart and a child's wheelchair. Or you're forced to prop up your child in the cart's with winter jackets to support him, as we used to have to do with Max when he was a tot and his core wasn't yet strong enough for him to sit independently.

Thanks to the explosion of social media over the last several years, parents have been speaking out about getting programs, play spaces, dance programs, after-school activities, you name it to include our children—at times, shaming them into it. (I'll never forget this story about a gym that wouldn't host a birthday party for a little boy with Down syndrome.) Obviously, this has been good for our kids. At the same time, it makes me hyper-aware of having to always push, push, push for our children's rights to participate in activities, enjoy the same fundamental joys of childhood as their peers without disabilities, and basically live their lives.

On occasion, it's easy, like that time the head of a local dance school unhesitatingly welcomed Max for tap lessons (he's since moved on). When we don't face barriers, when people instantly say "Sure!" to our children, it's always a wonder. Because often, we're dealing with exclusion; over the years, Max has been turned away from camp, programs and even a school where they could not—or would not—accommodate him.

We have made progress.

We have a long ways to go.

As I write this, Cynthia's petition surpassed its original 75,000-signature goal, and was nearing 150,000. My money's on Costco getting these carts; they are a pretty conscientious company (Canadian Costco has a multi-year accessibility plan posted online), and I'm betting this situation just never occurred to them. It seems like they and other companies would do well to have a designated disability task force if they don't already have one, including people with disabilities. It would also benefit them to hold focus groups with parents of children with disabilities and people with disabilities, too.

As parents of children with disabilities, we're here to advocate for sons and daughters who can't yet do that for themselves, and to raise awareness for a minority that many people aren't mindful of unless they have a disabled family member or friend. And so, we will keep right on knocking on doors, knocking down doors, shattering barriers and leaping over tall buildings in a single bound.

I will do anything possible to make this world better for my boy, just as Cynthia is doing for her daughter, just as so many parents do for their children. But how great would it be if others laid out welcome mats for our children instead of us regularly having to ask for them.
Ellen Seidman at 7:53 AM