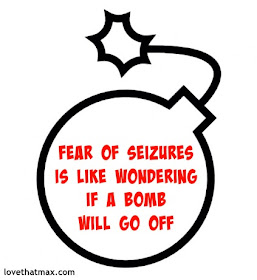 As we had breakfast at a favorite restaurant Sunday morning, Sabrina asked, "Why is Max's head shaking?"

Sure enough, Max's head was jerking side to side, like he was saying "no." Dave and I both jumped up from the table, scared.

He didn't say yes but I knew he was present. If he hadn't been, it would have been a definite sign of a seizure.

The movement stopped within ten seconds, and Max was back to normal.

The last time he'd had a seizure was two years ago, also on Memorial Day weekend. Max had stayed up late for a few nights, and the sleep deprivation triggered a grand mal that made his entire body shake for two minutes.

The night before our breakfast out, Dave had shut off the TV and tucked Max into bed. Only Max had gotten out of bed and turned on the TV,  as I realized around 11 when I heard noise from his bedroom and discovered him groggily watching TV.

I immediately dialed the pediatric neurologist's answering service and left a message. He called me back within a few minutes. I explained about the TV situation and the head movement.

"The good news is that he was present," he told me. He went on to remind me that as a teen, Max is more at risk for seizures. He also noted that because of that, and the sleepiness, we might notice occasional unusual behavior like this. He recommended we give Max an additional 1/4 of a packet of the compounded Trileptal he takes, sprinkled into yogurt or applesauce.

It was a relief that Max hadn't had seizure activity. It was unnerving to think that if Max was tired, he could start twitching like this.... or worse.

Worrying about the seizures is like living with a bomb that could go off. Maybe that seems like an awful comparison. Although it isn't something I regularly think about, the fear is real and it runs deep.

Max prefer to sleep with his door shut. For the last couple of nights, this has made me nervous; how would I hear him if he yelped, which is how the last seizure started? And so, I've cracked open his door and checked on him. Of course, this has woken up him, the last thing I want.

He mumbled something last night.

I knew he was, for the moment. Going forward, I couldn't be sure.
Ellen Seidman at 6:38 AM