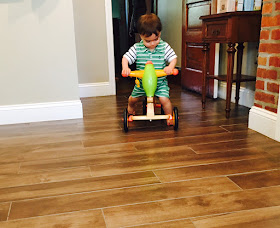 Ben wheeled his ride-on toy into the kitchen the other day, and we all laughed as he raised his feet up and coasted. He's getting the hang of it.

"Boys will be boys," they say, implying that most boys are the rambunctious, daredevil kind. Not Ben. He was timid about trying the play gym in our basement. On the playground, he likes me to hold his hands as he climbs or wants me to go up with him. Typically, we go down the slide together. He likes toy trucks; he also likes this Minnie Mouse doll we keep in his playpen.

The bottom of the main staircase of our house doesn't have a baby gate; we couldn't find one that would fit between the spindles and the wall. It's been fine, as unlike other kids Ben doesn't attempt to scramble up the stairs the second you take your eyes off him. Yes, of course, toddlers change. But Ben's pretty sane, which Dave and I deeply appreciate. (He didn't get the third-child memo for the first few months of his life, but he's come around.)

It's Max who first showed me how ridiculous it is to think that boys will be boys. As he's taught me,
great boys come in all varieties.

When Max was little, few would have remarked that he was just a boy being a boy because he didn't fit the physical profile. It took a lot for Max to learn to sit up on his own, pull to stand, commando crawl, crawl on all fours and then walk. When he was a couple years old, I'd hold him on my lap at birthday parties, feed him cake and sadly watch the other tots running around. Stereotypes can be painful when you have a child with special needs.

Max defined that whole boys-will-be-boys thing on his terms. He zoomed around our house on his seat with wheels. He roamed up and down the street using a walker with wheels, the ones the other kids in the neighborhood wanted to try.

As Max matured, so did I. I realized there is a wide spectrum of boyhood that encompasses many abilities and interests. Max wasn't deficient; he was as boy as any of 'em.

Thanks to Max, I have no expectations of how Ben should behave. Normal? Whatever.

Ben will be Ben.

Max will be Max.

Your son will be your son.