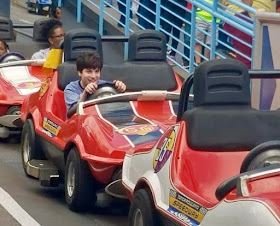 For months now, Max has been planning and anticipating a boys' trip to Disney World with Dave and Dave's dad, Grandpa Michael. I figured they'd have the time of their lives. I never imagined the major milestone that lay ahead.

Max had a Rubbermaid container sitting on the counter for the past few weeks, to be filled with mac and cheese for his airplane trip. He had their itinerary scheduled: Friday, Magic Kingdom; Saturday, Epcot; Sunday, Hollywood Studios and Animal Kingdom. He made sure we packed days in advance, including a collared Oxford shirt just like Daddy's for a nice dinner out. He wanted to wear jeans and his Fireman Max shirt on the plane. He told me to make him a sign that read, "Welcome to Disney World, Fireman Max! I will miss you! Love, Mommy." (I happily obliged.)

Max stood on our front porch and squealed when the Uber showed up, and Dave and I had a flashback to a Disney trip years ago when Max was little and not yet able to maneuver stairs and the taxi showed up to take us to the airport and before we knew it Max had miraculously bolted down the stairs to it.

Dave texted me updates throughout the trip. Max got to see his favorite characters: Mickey, Minnie, Donald Duck, Goofy and The Incredibles, with a bonus Buzz Lightyear thrown in. We knew that would be a highlight for him. He still believes. 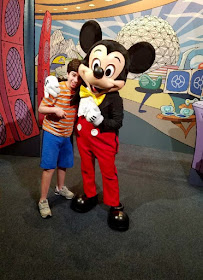 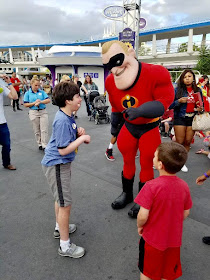 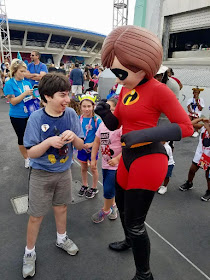 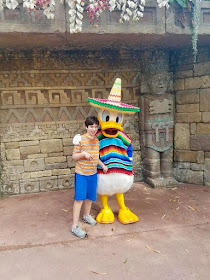 Dave and Max registered at Guest Services for the Disability Access Service (DAS) Card, where a staffer took both Max and Dave's photos and gave them a plastic card (you can also use a wristband). At rides, they could head to the FastPass stand for a staffer to scan the card and give them a time to return based on the current wait. (The DAS pass can also be used with FastPass+). The challenge for us is that Max has always been finicky about rides; he gets scared and backs out at the last minute. So having to wait around for rides based on return times doesn't work well. When Dave let staffers know that, they admitted them right away. The DAS Fact Sheet notes that Disney works with guests with disabilities based on their unique needs, and that's always been true for us.

The one ride we knew would be a sure thing: the Tomorrowland Speedway, which Max has always loved. In recent years, has taken to pretend-driving our minivan in our driveway, a favorite activity. But when I've asked him if he wants to drive a car when he grows up, he always says no. Once, when I asked if it was because he has cerebral palsy and he said yes, I pointed out that some people with cerebral palsy drive cars and I've showed him YouTube videos. Still, he has remained dubious.

So, Dave and Max headed to Speedway. And Dave texted me a photo—of Max driving alone. I called and confirmed, wondrously, "He is on the ride by himself?!"

Yes, he was. He didn't want Dave with him. Max was pressing the gas pedal and maneuvering the car all on his own along that 0.4 mile-long racetrack.

It was like someone had sprinkled pixie dust on me. When you have spent most of your child's life helping him along, seeing him willingly and successfully gain independence is magical.

Part of this had to do with Max's maturity, both emotionally and physically. I've heard other parents of children with special needs speak of firsts at Disney World that go beyond getting on rides, everything from new words to new steps. Part of Max's willingness to drive that car alone, I'm sure, had to do with the fact that he was in his happy place and had the confidence. Max wasn't just believing in Mickey and Minnie; he was believing in himself.

It became very clear to Dave on the trip that Max was breaking out, because for the first time in his life he went on a roller coaster, the Primeval Whirl in Animal Kingdom's DinoLand. Then he went on it again.

Max ended up going on that Speedway ride eight times. Who knows, he may come home and ask for the car keys.
Ellen Seidman at 6:37 AM