When your child wants to discuss his differences 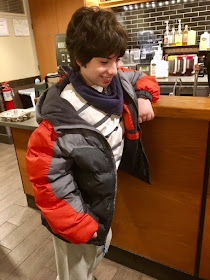 Max and I were looking at a drawing he had made during an activity. Some of the magic marker was smeared.

Max drools because of the cerebral palsy. It's no secret. If you know him, you know it's part of who he is. (It affects about one third of people with CP.) He doesn't sense saliva gathering in his mouth, and doesn't swallow accordingly. Years ago, his physiatrist gave him a Botox injection in his salivary glands. It's supposed to reduce production of saliva, but it did nothing. (I keep meaning to find an investor for my Mommy and Me Botox Clinic idea.) I've also tried to take Max to oral-motor training sessions, but he hated them.

Our solution: thick, cotton bandanas and repeatedly saying "Wipe your mouth, Max!" On occasion, he'll grab his bandanna and dab. When we're around others, Dave or I draw our hands across our own mouths as a signal for him to do it.

There's a procedure involving reversing the salivary glands that's effective, but it seems like a drastic measure to take given that the situation doesn't affect him medically. We have considered scopolamine; it's the patch used for sea sickness, worn behind one ear, and it is effective for drying up saliva. His awesome neurologist said we might want to consider it, as the drooling can make him stand out from his peers. But I don't particularly want to put him on any additional medication, and the drool hasn't bothered him...yet.

"Max, maybe one day you'll start noticing when you drool," I mused out loud.

And then, he had some questions.

"Did you drool when you were little?" he asked.

"Did Daddy drool when he was little?"

"Did Sabrina drool when she was little?"

"Did I drool when I was little?"

"Oh!" said Max. Then he walked away. I was all set to talk about it, and get into a bigger conversation about people having unique differences, but he was done.

The guidebook is all in my head. There is no "How to discuss drooling" section in the child development books. I wish there were.

Max's awareness is growing, so that's good. But it means he is also becoming more aware of his differences. It will be up to me and Dave to keep discussing what he wants to, and to remedy the drooling if he so desires. Meanwhile, we'll just keep telling him what a smart, handsome guy he is.