Adorable stuff about our children: What's on your swoon list? 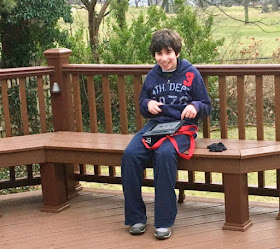 The other day, my friend Cindy asked what Ben is up to that's especially cute. Oh, just a million things: The way he toddles when he walks, says "goguh" for yogurt, sleeps with his butt in the air and his ankles crossed, sticks a finger in his mouth and stares up at his, pokes at our belly buttons, giggles when we make funny sounds, does laps around the kitchen counter with a cup of Cheerios in hand, concentrates when he's exploring a toy, snuggles on my shoulder....

There are a million cute things about Sabrina, too, who at 12 years old is still my baby: the spray of freckles on her nose and cheeks, the looks she makes when she poses for selfies, the victory dance she does when she aces a test, the way she runs on the lacrosse field and puckers her lips when she'd like a kiss and trusts that I'll know every answer to the trivia quiz on her app and sleeps in pigtails and....

Max, of course, is my oldest baby. Thinking about his cuteness has sustained me during times when I've been anxious about his development. He's never been the least bit cuteness impaired. When Max was little, I'd literally make lists of cute stuff about him so when I worried about his future I could whip out a piece of paper that detailed his deliciousness and force myself to focus on his present. It definitely helped alleviate stress.

In honor of Valentine's Day, here are 14 things on my Max swoon list:


♥ The smile that lights up his entire face when he's doing homework and gets the answer right.

♥ When he comes home from school and asks me, "How are you?" and he means it. Or when he asks "Are you tired?" or "Are you sad?" and he really wants to know. This boy's emotional IQ is through the roof. 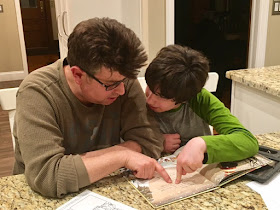 ♥ When I'm cleaning off the kitchen table after dinner and I watch Max—without my asking— carefully pick up the bottle of hot sauce or ketchup, hold onto it with all his might, carry it to the kitchen counter, put it down, open the spice cabinet or fridge, pick it up again and put it in. Obviously, he's just doing an ordinary task in his own way, but I appreciate all the effort that goes into it; grasping does not come easy to him.

♥ When we're driving and Max informs us, "Wrong way!" then proceeds to tell us which way to go. (He's often right.)

♥ When Dave and I are having an argument about something and Max says "OMG!"

♥ When he juts out his bottom lip when he's bummed. It's not that I like seeing him sad—it's just so cute, and he's been doing it since he was a tot.

♥ When you tell him something and he says "I KNOW!" 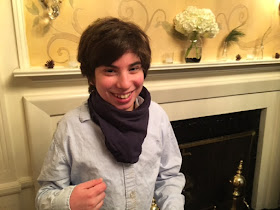 ♥ The way he informs everyone he meets that he is going to Disney World in March, from neighbors to the lady at the dry-cleaning counter

♥ When I introduce him as Max and he says "No!" and then I correct myself and say "Fireman Max"

♥ When Max follows Ben around the house and looks after him

♥ When I lose my phone in the house yet again and he trots off, finds it and hands it back to me, smirk on his face

♥ When I call home or arrive at our door and he says, "Hi, Mommy!" They're words I wasn't sure I'd ever hear, and they always bliss me out.