A little friendly competition at our house 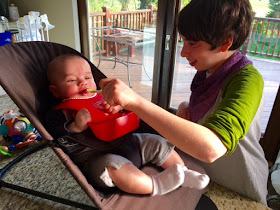 Sabrina begged to be the one to break Ben in, and so she had the honor. The four of us gathered round the kitchen table at around 7 a.m. to watch Ben's reaction. Which was, basically, "WHAT ARE YOU PEOPLE DOING TO ME?" We'd put the food in, he'd spit it out. Typical first meal. 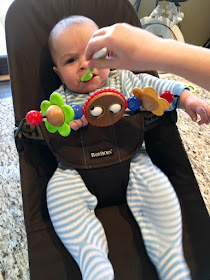 Given that he is mine and Dave's child and we are big fans of eating, we figured it was just a matter of time before Ben liked food. As in, by his second meal.

That evening, Max demanded to be the one to feed him. Sabrina tried to claim it was better if she did it since the baby was "used" to her feeding him, but Max stood his ground.


He mixed up a batch of oatmeal.


He did his best to coax it into Ben's mouth. At first, Ben was still dubious. 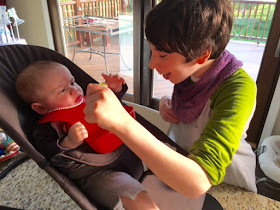 And so it went, Max cheerfully trying to convince Ben how delish oatmeal is (it's long been Max's go-to breakfast).

Soon enough, Ben was opening his mouth for more. Max shot Sabrina a "SEE?! I GOT HIM TO EAT!" look of victory.

I have sweet memories of me and Dave feeding Max and Sabrina for the first time. I so loved it that my big kids got to do that for Ben.

Now at breakfast and dinner (Ben's not yet doing lunch), the kids both want to feed him.

I sure hope they start fighting, soon, over who gets to organize the baby's drawers and dust his room. 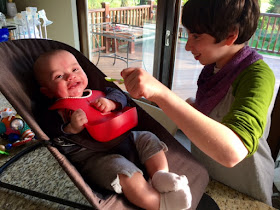