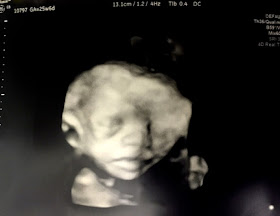 One of the things about being pregnant when you're already busy with two kids plus work, a house, and other assorted responsibilities is that you don't actually have much time to obsess over your pregnancy. I'm lucky; I tend to have pretty good ones, indigestion and uncontrollable cravings for potato salad aside. And yes, I feel him moving around throughout the day and that's a thrill but otherwise, I forget I'm pregnant. Unless I have to run to catch a bus or train at which point I realize that I am not so fast on my feet.

Yet doctor appointments are magical, a time to focus on my body and this baby. I get an ultrasound each visit. Lying there in the dark, watching the baby toss and turn, seeing the blue/red flashes of blood flow and hearing the heartbeat bring me both peace (at 26 weeks, he's doing well) and bliss.

During my last pregnancy—ten years ago—3D ultrasound was just beginning to be common in ob-gyn offices, and some charged extra for it. I got one of Sabrina for free, but it didn't come easy. I had to get a neurological scan because of what had happened to Max. The doctor clearly hadn't read my chart because when I was talking about Max having a stroke he said, "What did the autopsy reveal?" I sobbed so hard I could barely talk. "He didn't die," I finally got out. The doctor felt badly. "Here, you can punch me," he said, offering a shoulder. I didn't take him up on it. Afterward, the nurse did 3D imaging, which was almost worth the trauma.

Now, I get to see the baby in 3D every time I go for a visit (I ask for it). This time around, I got a good glimpse of his face and I was all: "He has my husband's mouth!" I'm deluded, though, given that little dude is pretty smooshed in there and not yet at his most photogenic.

He's growing at a good pace. I'm not worried about him; I'm at a high-risk practice and in good hands. Same with Sabrina. I wasn't nervous about her until C-section day. We were late for the appointment due to traffic, and then we kept getting bumped for emergency C-sections. As the day dragged on, I got increasingly anxious. Being in the hospital was stirring up traumatic memories. I wanted her OUT. I needed to see that she was OK. Late afternoon, I lost it. "I'M LEAVING!" I told Dave. "Where are you going?" he asked. "I'M GOING TO SEE A MOVIE!" I declared. (I didn't.)

When I showed Max the ultrasound photo, he thought the baby looked like him.