On explaining your child's disability to him 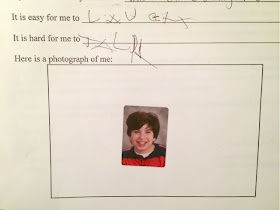 My heart twinged. Obviously, Max knows how much effort it takes to articulate words, it's just that he's never acknowledged it. I do—I regularly say "Honey, I know it's frustrating" when he's trying to say a word or a phrase that I can't understand and he's insistent on speaking it instead of using the speech app. Max tends to lean over and repeat himself loudly in my ear, because he thinks I have a hearing issue. It's me who has the problem, not him. Love that.

Max knows he has cerebral palsy, and is figuring out what that means. (A couple of years ago, he informed me that Lightning McQueen—his idol at the time—had cerebral palsy, which I figured was a good sign.) I try to bring up the CP in an organic way, like after he wrote that talking is hard. I explained that the muscles in his tongue sometimes don't do what he wants them to, because cerebral palsy can make it hard to move certain muscles. I showed him that his body has lots of muscles, from head to toe. I asked him to pick a leg up off the floor, and told him he did a good job using the muscles there.

Someday, I'll explain to Max that his brain can't always send signals to his muscles to tell them what to do, and we can talk about the kind of CP he has (spastic four quad), but we're not there yet. I'm not sure about the "right" way to talk about cerebral palsy. As often happens with parenting, you wing it and hope for the best. Who knows, maybe I'll be able to outsource it. He he.

So then Max grabbed his iPad and showed me photos of classmates. He was asking what was up with them.

"You know some kids have autism, right?" I asked.

He wanted to know what Sabrina has.

"Sometimes, she has an attitude," I said, cracking up. He didn't get it (perhaps a sign I really should outsource future conversations). Then I told him, "Sometimes people have challenges that you can see and sometimes you can't see them." Then he decided enough with the talking, he needed to go watch some fire truck videos.