The connections you make in Special Needs World 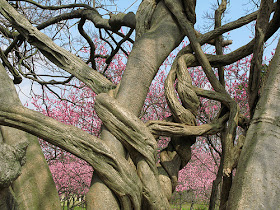 A pile of pebbles lay on the street in front of our driveway. The town road repair crew had stopped by several months ago after I called; Max needs a smooth surface when he rides his bike. Only the patch had started to break up and after last week's thunderstorm, it was history. Max's bike kept getting stuck in the gravel and once, he almost tipped over.

Yesterday, I called the town department that handles roads, and the secretary said she'd have the supervisor call back. When he did, I told him that we needed a more permanent paving solution and he promised someone would come by in a few days. I thanked him, and explained that I had a kid with disabilities who needed a smooth pavement to ride his adaptive bike.

"I also have a son who's disabled," he said. "He's older. It happened two years ago."

In a heartbeat, I knew who this father was, and what had happened to his son. I'd read about it in the local paper: He fell off a ladder in the pool in his backyard, landed on his arms and sank to the bottom. I'd contributed to a fund set up to help the family make alterations to their home. I'd wondered about stopping by with Max to say hi, and then wondered if he want that and so I hadn't.

And then, we were talking. He told me about the challenges of finding stuff for him to do. About how his son would notice people staring at him when he went out and how uncomfortable it made him. About how his son's spirits hadn't faltered and this father hoped they wouldn't.

His wife, it turns out, used to teach at Max's school. This man pitches in with a local club that sponsors a camp Max goes to for a week every summer.

We talked about how you never knew what life was going to throw your way, but you found ways to deal. His son was using voice recognition technology for TV controls. He had use of a knuckle, and he texts with it. We talked about adaptive sports programs, and I promised to send some links.

I have an 11-year-old who had a stroke at birth and got cerebral palsy. This father had an 18-year-old teen who had lost the use of his limbs in an accident. And yet, we had an instant connection and a mutual understanding. We were eager to share info and resources. We faced similar struggles with our children.

Every single time I meet a parent who has a child with disabilities, I feel less alone—and I hope that the other parent finds our encounter similarly heartening. It never gets old, it's always a moment. I can recall dozens of these conversations over the years: that mom at the birthday party whose child has autism, the fellow commuter on the train whose child has Down syndrome. And then there are the countless online connections I've made with other moms and dads. We don't just have a bond, we inhabit a world that other parents know nothing about.