Let It Go, like you've never heard it sung 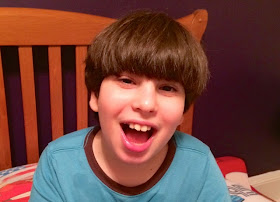 For months now, I've heard kids singing Let It Go: in the mall sitting area, at birthday parties, at Girl Scout events. The little girls always sound so adorable when they belt out "Can't hold it back anymore!" I never get tired of hearing them or, of course, Idina Menzel.


Max isn't a kid who bursts into spontaneous song; it's not in his repertoire of abilities. But for years now, he's gotten music therapy, and he's been known to sing words he can't yet speak. The therapists have put Max's obsessions to good use—they've created sing-along songs about Lightning McQueen, the color purple, a Disney Cruise we went on and his beloved Cars 2 piñata.

Max's current music therapist, Amanda, has been trying new songs with him. I'm usually at the office when she's at the house, but she shares videos. When I got home from work one day and opened an email from her, holy wow, there was Max singing Let It Go. With feeling.


Some people might listen and think that Max is just "trying" to sing.

To them I'd say, change your definition of singing.

A few weeks ago, I was in my bedroom on a Saturday morning and heard singing coming from downstairs. It was Max, singing along to the YouTube video of Let It Go. That was the first time I ever heard him singing on his own, and if I were in a Disney movie there would have been a swirl of glitter surrounding me, in my ebullience, and perhaps bluebirds dancing around my head. Oh, wait, that's Snow White.

Then his teacher sent an email from school saying that Max was loving the Frozen karaoke app another student had on her iPad. I downloaded it. And, whoa: The singing floodgates have opened up.

Max now sits and sings along to all the songs from Frozen, as often as he can. Sometimes, both kids hang on the couch and sing together, then they play back the recordings and giggle. 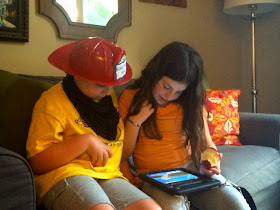 Max loves to sit in his room and sing karaoke Let It Go. He's been singing for his teacher and therapists at school. If you visited our house, he'd ask you to sit next to him on the couch so he could sing Let It Go for you.

Can't hold him back anymore.
Ellen Seidman at 6:35 AM