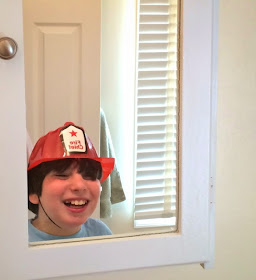 Max and I went to the local firehouse this weekend, where the guys know him by name. "Hi, Max!" said Firefighter Ed, who was busy washing Ladder 31, Max's favorite truck. He helped Max grasp the broom stick and then together they scrubbed Max and forth.

"It's my fire truck!" Max informed him, and he laughed, only Max wasn't kidding. He also refers to the station as "My firehouse."

Over the years, I've wondered about what kind of job Max might have when he gets older. I once teared up in Whole Foods as I watched a woman with Down syndrome clean tables before I got a grip and realized I needed to stop imposing my ideas of success on her or on Max. I don't get sad anymore thinking about what Max might have been able to do if he hadn't had a stroke at birth; I'm genuinely curious about possibilities. Like during his Lightning McQueen phase, I pictured him working at a Disney store, happily greeting people (and screeching when someone dared to leave the store with any Cars 2 merchandise). Now that he's in his fireman phase, I've been pondering that.

This weekend, I saw a CBS News story about Tony Tumminello, a man with intellectual disability in Lansing, Michigan who spends around six hours a day at his neighborhood station, Fire Station One, as he has for the past sixty years. 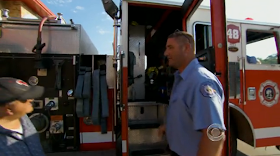 Tumminello first visited the station sixty years ago, a teen fascinated with fire engines. Today, at 73 he has his own place and a job at a flower market, but the firehouse is basically his home and the firefighters, his family. He eats all his meals with them. They do his laundry, clean his hearing aid, help him shower and tease him good-naturedly. Tumminello jokingly calls the battalion chief his "assistant."

I wondered if Tony Tumminello had ever asked about working at the firehouse. What kind of job could Max have, given that physical prowess is not exactly one of his assets? But Max, he's got his future gig all planned out, as he's been talking about since April: He'll ride in the back of the truck, and not drive it. He'll tend to fires only on ground floors, and won't climb ladders. He likes to walk around the house and make the whooshing sound of a fire hose spouting water and, even better, pretend that I am on fire and he has to put me out and then I gleefully shout "You saved me!" It's all very touching.

When I call home from work, all he wants to hear me say is, "You are going to be a fireman when you grow up!" And he wants me to say it again and again. And I tell it to him, five or ten times in a row, because he's 11 years old and he's so excited about the possibility and who knows what the future holds?

Last night at bedtime we were reading Big Frank's Fire Truck, part of Max's growing collection of books about firefighters and fire trucks. Max was particularly amused by my demo of stop, drop and roll. At the end of the story (non-spoiler alert), Frank goes home to his family when his shift is done.

"Max, are you going to go home to your family when you work in a firehouse?" I asked.

"NO!" he said, firmly, a little alarmingly so, and then he reminded me that he was going to live in the firehouse.

"Are you still going to get married?" I asked, because he's previously told me that he's going to, and that he thinks the girl on that Disney show Jessie is pretty. (He's over Miranda Cosgrove, unless she happens to own a fire truck.)

"OK, then, if you live in the firehouse, where is the person you marry going to live?" I asked.

Max pondered that. He seemed a little stumped.

"IN A SMALL HOUSE!" Sabrina shouted, from the other room.

Answers. There are always answers.