Max is driving and maybe someday, for real 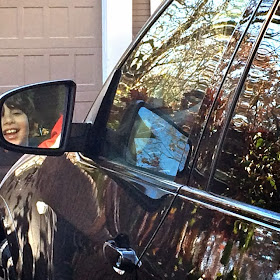 Max likes to sit in our car while it's parked on the driveway and make like he's driving. He grips the steering wheel, bounces up and down as if he's on a bumpy road and pretends to honk the horn. Dave or I hang outside, drink a cup of coffee and check email, occasionally noting "Watch out for that truck!" or "Hey, let's go to the drive-in movie!" or "Don't go too fast or the police will catch you!" (which cracks Max up every time).

It makes me wonder whether Max will be able to drive when he grows up.

I usually try not to let my brain fast-forward into the future, given that it's not something I can control. Focusing on the here-and-now reality of Max is the best way to live life; as I learned when he was little, will-he-be-able-do-that musing causes a lot of anxiety. But the driving daydream is innocuous enough to indulge in, given that it's not a major life necessity. My mom never did learn to drive, and it's never been an issue. Some of my friends might say I never really learned to drive either, though I do.

First I Google "adaptive driving specialist" because it's always comforting to know about experts out there. Seems like there are "driver rehabilitation specialists" who train people in adaptive driving and outfit cars with special equipment. So, Max can someday add "driving therapy" to his already impressive list of therapies. Wonder if insurance will reimburse for that? Bwaaaaa-ha-ha-ha-ha!!!

Then I Google "driving with cerebral palsy" and get sucked into comments in some forums. Some people with mild CP drive, but many with the more involved kind don't. I picture Max pedaling his tricycle up and down our street and how much his control has improved over the years; this spring, he rode bumper cars alone for the first time. Then I ponder the intricacies of driving and wonder how he'd handle them with his fine-motor challenges. And how could he take the written test? Would they let him use his iPad? (This is what happens when my mind gets going.) Then I think about how years ago Max wasn't capable of any steering at all, and I wonder just how much his skills will improve in the years to come.

I find a YouTube video of a beautiful girl with right side hemiplegia who has adaptations in her car that enable her to drive using her left hand and left foot.


Max's CP affects both sides, but his left side is the stronger one so this gives me hope. It also occurs to me that if nothing else, maybe he could find some cute chick to drive him around.

And then, DOH!, I search for "driverless car," the one Google founder Sergey Brin tools around in. It's an adaptive Toyota Prius that has laser-guided mapping, radars in the front and rear to determine positions of distant objects, a camera mounted near the rear-view mirror to detect traffic lights and moving obstacles like pedestrians and bicyclists and other auto-features. The cars will hit California streets by 2015 and data shows they are smoother, safer drivers than people.

Technology will be the answer for Max, I suspect, as the iPad and Proloquo2Go speech app have have been for his communication.

Although having a babe drive him around would be a fine option, too.
Ellen Seidman at 6:38 AM