A kid with Down syndrome in a TV commercial: progress! 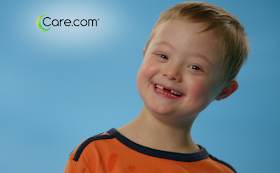 In the last few years, I've seen a handful of kids with special needs in ads (including a Girl Scouts catalog). But I've never seen a TV commercial with a child who has special needs until recently, when a reader told me about one. This Care.com commercial features a bunch of cute kids including Carter Murai, a 7-year-old with Down syndrome. What he likes in a babysitter: "Someone who loves bubbles!"


Carter's a first-grader in Bedford, New Hampshire who loves to dance and perform; his parents responded to a Care.com casting call. His speech pathologist at school helped him practice his part. Although he lost his two front teeth before filming started, he spoke his part like a champ.

In a perfect world, kids with special needs in ads would be an ordinary, everyday thing. In the real world, it's still rare. Last year, when adorable tot with DS Valentina Guerrero landed on the cover of a swimwear catalog, I was thrilled with all the attention it received. The more companies realize including kids with special needs in ads is a great thing, the more it will happen.

I've done work with Care.com (which has a dedicated special needs section), and asked founder and CEO Sheila Marcelo why they didn't make a big deal out of featuring Carter in the commercial. She said, "We didn't see the need to promote his inclusion because we just don't see him as different from any other child who needs care. He was a star on the set!"

Love that. Hoping this commercial will inspire more companies to do the same. Come to think of it, it's time Max broke into modeling, so he can support his Cars 2 merchandise habit. I'll get on that right away.