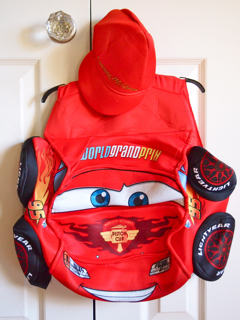 The Lightning McQueen costume arrived in the mail Friday, sent by HalloweenCostumes.com. It was super-cute—that face! Those wheels! That cap! I knew Max would be out of his head with joy when he saw it.

I just a hard time deciding to let him get it.

It all started in September, when we were in a shoe store. Max spied a pair of Lightning McQueen sneakers and instantly fell in love. But they were toddler size. I promised him I'd try to get them on the computer when we got home. As it turns out, hardly any store still carried ones in Max's size.

It was one of those little rude awakenings: most other kids Max's age are no longer into Lightning McQueen.

Finally, I found a pair in his size at Disney. I hesitated, for the same reason I didn't get Max those purple Crocs one summer: I don't want him to stand out from other kids. I don't want him to look babyish. The stuff he does at home that's immature for his age, like watching Mickey Mouse Clubhouse, is one thing. But going public is another; Max needs all the help he can get fitting in with other kids.

Still, I bought the sneakers, and he'll be getting them for his birthday in December.

And then, he told me he wanted to be Lightning McQueen for Halloween. (Again.) He nodded, grinned gleefully and said "YES! YES! YES!" when I showed the outfit to him on HalloweenCostumes.com. The boy wearing it in the picture looked to be about 7.

Once again, I was torn between a car and a hard place.

We've come a long way. Years ago, Max didn't want to get dressed up at all on Halloween. We let him go around our neighborhood in ordinary clothes (something that made one killjoy email me to say was rude, boring and showed a lack of spirit). In recent years, Max has gotten into Halloween. He keeps telling me that he wants to eat all the candy, which is interesting because he usually doesn't have any interest in the stuff. I suspect he's plotting to torment Sabrina, who's quite the candy hoarder.

But a Lightning McQueen costume on a boy who's almost 10? Again, I had to repress that part of me that's fiercely protective of Max, the part that doesn't want kids staring or snickering. I had to squelch the part of me that says this is what Max "should" be into at this age, and accept the reality of what he is into.

And so, he will be roaming our neighborhood in one glorious Lightning McQueen costume next week (along with his beloved purple bucket). And I will be there, too, watching the other kids watch him...but mostly enjoying Max have the time of his life.
Ellen Seidman at 6:40 AM