Let's talk about people who cling to the word "retard" 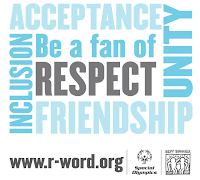 Let's talk about the people on Twitter who constantly fling the word "retard" around.

Let's talk about major sites like Zazzle that sell shirts that say "Retards do it gooder."

Let's talk about commenters who regularly leave remarks on the video I made about the word like "I spy a retard!" and "What a retard."

Let's talk about the commenters who saw that video on CNN.com and felt compelled to say things like "Please don't take away the word retarded, it's a great word!"

Let's talk about the fact that in 2010 Congress banned the use of the words "retard" and "retardation" in federal health, education and labor laws because "retard" has become a pejorative word that essentially means "stupid" or "loser." It demeans people with disabilities—and makes the world think less of them. The preferred term is "intellectual disability."

Let's talk about the fact that per plans for the fifth version of The Diagnostic and Statistical Manual of Mental Disorders (DSM-5), to be published by The American Psychiatric Association in 2013, the term "mental retardation" will be replaced by "Intellectual Development Disorder."

Let's talk about the fact that The Special Olympics have launched a full-out campaign against the r-word, Spread The Word To End The Word.

Let's talk about doctors who use "mental retardation" as a reason to not give kids life-saving operations, like Amelia Rivera, who needed a kidney transplant and whose doctor originally told her mother "I do not recommend Amelia for a transplant because she is mentally retarded."

Let's talk about smart comedians like Margaret Cho who, when asked about having a baby at an advanced maternal age, responded "I don't necessarily want to have a retard."

Let's talk about pundits (albeit loathsome ones) like Ann Coulter, who recently tweeted "Been busy, but is Obama STILL talking about that video? I had no idea how crucial the retarded vote is in this election." She was referring to a video the President made for the National Forum on Disability Issues.

Let's talk about the ongoing use of the word in The New York Times. In a recent piece by reporter Danny Hakim about a man filing a lawsuit for the abuse of his son, Hakim referred to the son as "severely retarded," as tracked by Louise Kinross. Wording was later changed, she pointed out, to "severe mental disability." Louise edits and writes the award-winning BLOOM blog and magazine for Canada's Holland Bloorview Kids Rehabilitation Hospital, and is mom to Ben, who has intellectual disability.

She emailed Hakim, as she details in a post, and also shared the emails with me. He noted that "mental retardation" is a diagnosed condition; said that at the New York Times "we've actually used the term with some frequency"; and explained that a copyeditor had most likely made the wording change. NYT copyeditors evidently missed this September 29th article, in which a reporter referred to a man as "severely mentally retarded." After another round of emails, Hakim agreed he would "carefully consider" her point going forward.

Louise also contacted the office of the New York Times' Public Editor, and heard this from Joseph Burgess: "If the proposed change in language ends up being enacted, let me know and I will bring it to the attention of the standards editor. That would be a more appropriate time for the public editor's office to push for a revision in language."

Let's not talk about the labyrinthine ways of The New York Times. But let's say this: If smart, educated, otherwise conscientious people—the kind who shape millions' of people's thoughts every day, the kind whose business it is to care about words—don't care all that deeply, then we have a very, very, very long way to go. "Why does the New York Times hold on to using what in common speech has become a demeaning slur?" Louise noted to me. "In particular, why do they cling to such a word when describing one of the most marginalized groups in society?"

Let's talk about how this isn't just about a word, before people start crying censorship and that weeding out a word isn't going to make a damn difference in the way the world treats kids like Max or Ben. It's about furthering a conversation on how we view people with disability—and treat them as equals in society.

Let's talk about how kids like Max and Ben need every advantage they can get in this world.

Let's talk about this, and let's keep right on raising our voices.
Ellen Seidman at 6:40 AM