The gift of Max: how my child changed my perspective on disabilities 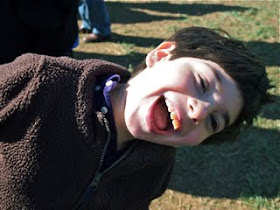 Dave and I are walking into a local diner to grab a bite; our babysitter is staying late, and we're enjoying a rare weekday night out.
"Hello! It's cold outside, isn't it?" says a man standing by the front door. He's a tall, portly guy with a friendly smile.

Dave and I sit down at a table.

"That's a good table!" the man says. "Yes!" I respond, smiling back at him.
Dave and I get the menus, order dinner, talk. The man is by the countertop now, speaking to the waitresses about the weather. He says goodbye to them and then he stops by our table.

"It's getting chilly outside," he says to me.

"But we had some beautiful days in October!" he says.

"October is my favorite month," he tells me. "Also, June, July, August and September. And October."

"Those are good months!" I say. "September and October are my favorites."

"It never sleets in September," he says.

"No, but it just might in October—I heard it's going to get very cold," I say.

"November is usually cold and December is even colder and January is colder," he tells me.

We keep talking for a minute or two about the weather. Everyone at the tables around us, mostly older guys sitting alone, are looking down or away, anywhere but at us.

The man tells me goodbye, starts walking to the door, turns and comes back.

"I'm sorry for talking with you," he says.

He heads to the door, turns and comes back.

"That's good that you like to meet new people," he says.

And then he leaves.

The waitress stops by with our salads. She knows our family, knows that we have a kid with special powers. "He's a great guy," I tell her. "Is he a regular?"

"Yes," she says, "Elliot has been coming here for years. He's awesome."

And then, I can't help it: I want to know about him. Whenever I see adults with disabilities, I am overly curious about their lives; someday Max will be one of them, and I am inspired by adults who are independent. So I ask: Does he drive himself around? Does he live alone or in a home? Where does he work?
He drives, she tells us; he lives by himself, he works as a teacher's assistant at a school, he has autism.

As Dave and I eat, we talk about Elliot and how great it is that he is so self-sufficient. But something is bothering me. Really, really bothering me. Finally, I speak up.
"If we didn't have Max," I say, slowly, "how do you think we would have acted with that guy?"

Dave looks at me. "We probably would have been less open to speaking with him," he admits.

And that is exactly what is bugging me. I was glad, genuinely glad, to make conversation with Elliot. But if I didn't have a kid with special needs, I most likely would have been wary. Not unfriendly, because I'm friendly to everyone, but more hesitant to engage in conversation. I might have considered him "odd." And it's disturbing to think of how close-minded I might have been if I didn't have Max.
My friend Hallie recently shared a story on my Parents.com blog about standing up to a teen who used the word "retard." In her post, she admitted that she and her husband freely used the word before they had a child with Down syndrome. She got a few sharp comments from people who wondered how she could be so "righteous" and "hypocritical" about the word "retard," given that she herself used to use it.
Hallie was being very candid. It took having a child with special needs to change her view of people with special needs, and how they are treated. Same goes for me and many other parents of kids with special needs, I am sure...even if it's hard to admit.
What scares me is that these are the perspectives Max will face for the rest of his life. So many people out there don't know what I now do: That kids and adults with disabilities aren't to be pitied. Their personalities are not defined by their disabilities. They may speak, move and act in a unique way but they are more similar to others than they are different. Their lives can be as good as anyone's. And, really, what is typical, anyway?
Thanks to Max, I've met wonderful kids and adults I might have never met, or been hesitant to meet. I've come to understand and embrace a world I might have never known. My mind has been opened and enhanced.
That is the gift of Max...just one of many.
Ellen Seidman at 6:40 AM