A sister speaks out against the word retard, another sister learns 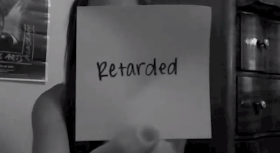 Yesterday, I watched a video called "Retarded" by a teen girl named Regan. A reader, Stephenie, sent me the link.
I cried as I watched it. Those words hurt. I thought back to how painful it was when some jerk on Twitter tweeted at me "How is the photo wrecker?" after I asked him not to use the word "retard" and how I had to go to Urban Dictionary and look up what it meant.
I cried because I get a little dejected when I write about how vile the word "retard" is and people write back stuff like "You are so retarded" or defend its usage. Not that I am going to stop speaking out about it.
I cried because I was moved by her strength and love.
I cried because I yearn for Sabrina and Max to someday have the relationship this sister and brother have.
Then I showed the video to Sabrina.
We've never yet discussed the word "retarded." She is still trying to grasp what special needs means. The two of us were out having lunch the other day and she saw a teen boy in a wheelchair at another table eating with his family. He looked like he had cerebral palsy.
"He's special needs," she said.
"Yes, he has special needs," I said.
"He holds his hands like Max does sometimes," she said.
His hands were tucked downward.
"Yes, sometimes Max does that," I said.
"And sometimes when Max eats he holds his hands like this!" she said, and she pulled her arms up tight against her body.
"Yes, Max has cerebral palsy and having that means that sometimes your muscles get tight," I said.
And then she didn't ask anything else and I didn't offer up any more. I let her steer these conversations.
But I really wanted her to see the video. I knew she wouldn't understand all the words or totally grasp the concept, but she'd see this sister's love for her brother.
We sat on her bed and watched it together. I read the words out loud as Regan held up the slips of paper. "What's that mean?" Sabrina asked a bunch of times. Her main observation: "She has really long hair."
Afterward, I explained to her that the word "retarded" is a word people used to use to describe people with special needs, but now we don't use that word anymore because it's mean. I said that people still use that word when they think something is stupid, but that it's still a mean word to use.
She listened, and had no other questions. And then we were done—for tonight, anyway. Because this is a conversation we're going to keep having for many years to come.
Ellen Seidman at 6:50 AM