Sports for kids with special needs: a home run 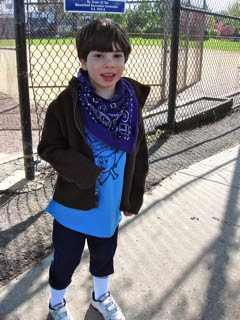 Except... the gate was as far as we got that day. Max wanted no part of the team. That's what happened last season; he just wasn't into it, and Dave stopped taking him. This year, though, I wasn't letting him off the hook.

I wasn't sporty myself growing up; my parents were all about learning and reading, and lugging a pile of books home from the library was as athletic as I got. But I want to instill a love of sports in the kids—because it's healthy, because it boosts their confidence, and because it's good, clean fun. Sabrina's taken soccer classes, and just started on a softball team. She also does gymnastics.

I think sports are especially important for Max: The more his muscles move, the better. Sports can give his ego a workout, too. Sure, Max loves playing t-ball in our backyard (perhaps you've heard me screeching "NICE HIT, MAX!!!"). I just want him to feel proud of his accomplishments on the field, around other kids and parents. I want him to have that sports high.

Back when Max was born, someone gave him a Baby's First Baseball set. It sat in Max's toy chest for years, unused, because he wasn't able to grasp the bat. The mere sight of it tortured me until finally, I gave it away. Back then, I didn't have the hope I do now. My patience lacked endurance. Then at Max's fourth birthday party, he got an I Can Play Basketball game. With a lot of focus, he was able to grasp the little orange rubber ball with both hands and get it through the net. SCORE! T-ball came along, too, over time.

In recent years, we've tried taking Max to soccer classes for kids with disabilities. No go. We're not participating in local Special Olympics programs just yet. Max has a fear of big crowds—both the noise and the mere sight of them. I want to give him another year to mature, and I'm hoping softball will be a big step toward that. His right foot is going to slow him down when it's casted in a few weeks but for now, Max can still run just fine, especially if he is trying to get away from me because it is time to stop playing outside and come in.

Sunday morning, the four of us went to a game. From the start, Max was less resistant than the first time, perhaps because I'd been talking about playing softball all week. Or maybe because I promised him chocolate ice-cream later on. OK, especially because I'd promised him ice-cream.

Max tentatively wandered into the park where the field is. 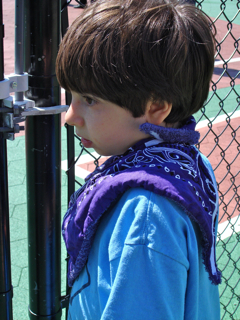 For a half hour, he stood and watched the other boys playing. There's a mix of kids on the team—kids in wheelchairs, kids with autism and Down syndrome, teens, little kids. The pitcher was really good at tailoring his toss to the child's abilities, coming up closer for kids who struggled to aim the bat. The umpire stepped in to help with batting as necessary, although most kids pushed him away because they just wanted to do it themselves. Loved that.

Each and every kid had the biggest grin on his face when he hit the ball and made it to first base, and parents cheered like crazy every time.

I'm telling you, if you ever need to feel reassured about your child's capabilities, get him to play a sport. Most can be adapted (er, not that I am recommending rock climbing or sky diving). And nothing compares to the thrills you feel as as a parent, one who wasn't sure her kid would ever walk, let alone live. You watch your kid play, you watch all of these kids play, and you get this rush of happiness. It's a sports high for you, too.

"Max, you want to hit the ball?" I asked for the umpteenth time, and finally he said "Yes!" He chose to do t-ball. "He doesn't like loud clapping or applause," I announced to everyone as he ambled up to home plate, and felt like I was a celeb publicist saying "No autographs, please."

You'll hear me cracking up in the video because at home, Max can seriously whack the ball. Here, he taps it as if were an eggshell. I think he was just toying with everyone. I didn't care; my heart was running bases at the mere sight of him at bat.


Max was very pleased with himself. And guess what? He cried when we left...because he didn't want to go home.

Do your kids do any sports, at home or on teams?

This is the second in a series of posts sponsored by P&G, for whom I'm covering The Special Olympics—they're a sponsor! "Like" their Thank You, Mom Facebook page and they'll donate $1 toward Special Olympic Team USA's journey to the World Summer Games in Athens.
Ellen Seidman at 9:00 PM