Cerebral palsy is a sneaky demon 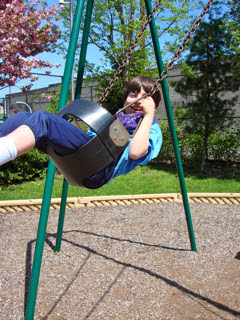 Sometimes, I forget all about the cerebral palsy. It's not hard to, because Max is such a happy, healthy kid. Sometimes, it blindsides me, as it has recently—and shatters my calm about being mom to a kid with disabilities.

It started a couple of months ago, when I asked one of Max's speech therapists why he has so much trouble saying "hard" consonants, b's and p's and k's and d's. She explained how a lot of it has to do with breathing control, and how in turn that has to do with trunk control and weak core strength.

I was more aware of these issues when they prevented Max from crawling and walking, but once he was on his feet and getting around, it was no longer up there on my list of worries, replaced by other priority worries. Now it was back to haunt him, and me. I organized a conference call with his physical therapist (at school), occupational therapists (the one at school and the one he sees privately twice a week) and speech therapist (at school). Over the years, I've found that calls like these are the fastest, best way to come up with ideas.

I learned some new stuff during the call—for instance, Max's physical therapist had him doing sit-ups. She recommended I do them with him at home. So I've been sitting on his feet while he's lying on the floor and gently pulling him up by his arms. To motivate him, I do sit-ups, too, which cracks him up. I am not sure belly laughs are helpful for his core control, but at least they entertain him.

Max's PT reminded me that Max has been doing yoga at school, and sent home some positions to try. 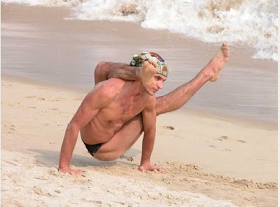 I don't think either of us will be doing this one anytime soon although if I had to take bets, my money is on Max.

So, I knew we had to focus more on core strength. Then a couple of weeks ago, the physical therapist told me that Max's right foot is tight. It's one of the reasons his new braces aren't fitting him so well, she thought. I hadn't noticed that but when he came home I looked and, sure enough, his right foot was turning in. Uh-oh. And...sigh. He still manages to walk OK, though he limps ever so slightly, with his foot slightly arched.

When I stretch his right foot, as we're supposed to do, it feels really stiff and impossible to flex. It is the cerebral palsy, and my child is caught in its grips.

"Does it hurt?" I've asked Max. "Noooo," he says, shaking his head, and it brings me some peace to know that he's not in any pain, and that he is able to tell me so.

We took him to the physiatrist last week. Turns out that Max's recent growth spurt has affected the muscles of his right foot (it's his more challenged side, since the bilateral stroke he had was worse on the left side of his brain). Because he suddenly shot up, the tendons couldn't keep pace. They were already on the tight side, but now they are even more so (spasticity, they call it). So Max will get a series of casts for three weeks, one a week. Each will subsequently stretch his foot a bit more, to relax the muscles and set them straight. Sadly, the casts do not come in purple (I asked, of course).

Meanwhile, tomorrow Max is getting Botox in his right hand, to help loosen it up. We're also trying Botox in his jaw to see if it helps the drool ease up. I still have no set plans to open that Mommy and Me Botox Clinic that could earn us a fortune.

This sucks. Just. Plain. Sucks. I always knew that during adolescence, with its hormones gone wild, Max would be at renewed risk for seizures. I never thought that at age 8, the cerebral palsy would flare up.

Of course Max will still be able to walk, no matter what. It's not going away. But the walking has been a hard-won victory, years of toil (Max) and tears (mine), and the prospect of regression is unnerving.

Tonight I am angry, so angry, at the cerebral palsy.
Ellen Seidman at 9:05 PM