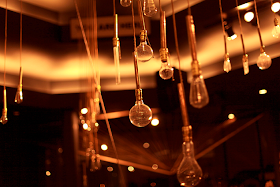 Saturday night, bloggers did readings at The Eiffel Society, an industrial-chic lounge constructed from remnants of a restaurant that once sat on the Eiffel Tower in Paris. I loved the look of the place. I felt happy to be out in New Orleans, and not one bit guilty about being away from Dave and the kids. I needed (and deserved) fun time with friends. Then Kyran Pittman read from her new book, Spinning Dandelions; she mentioned a forgetful Tooth Fairy. And suddenly, I felt awful.

I had never done The Tooth Fairy with Max. Never considered it. I guess I didn't think he would get it, and Max hadn't known to ask me about it. When his first tooth came out (he was at school) it went AWOL; he'd swallowed it. Same with the next ones that followed. I worried that I had no tooth to leave for the fairy. Months later, I did manage to collect one of Max's little teeth. And all I did was wrap it up in a wad of cotton and put it in a mementos box. And now, that seemed so wrong to do.

What kind of mom denies her child The Tooth Fairy?! And what was I doing, underestimating Max like that? So what if he wouldn't have exactly grasped the concept. Who the heck IS this Tooth Fairy, anyway?! It's not like photos exist or she has a website or her own talk show or anything. Although I did search on Flickr, and found this Tooth Fairy... 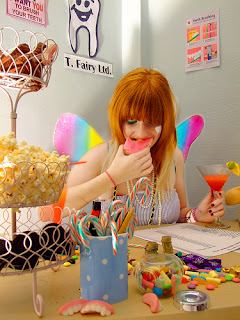 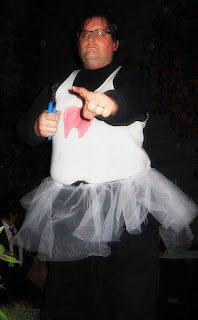 Really, The Tooth Fairy is however a parent spins her (or, er, him). I certainly could have imagined some Purple Spaghetti Tooth Fairy for Max. And besides, he surely would have enjoyed finding money beneath his pillow.

It's weird how this had all never occurred to me till the other night. Sabrina's first tooth has yet to fall out, and she's been talking and talking about it. Every night, she makes me wiggle one of her front teeth. "See? It's loose!" she'll say. And I'll say, "Maybe soon!" She came home from school recently with a special little felt holder for that first tooth. Friends have told her that if she leaves it under the pillow, The Tooth Fairy will bring her some money. She hasn't yet asked me what the Fairy's going rate is, but I am sure she will...and maybe try to negotiate.

As I sat there in that dark room, I felt swallowed whole by guilt. I mean, I know I don't belong in Mom Jail or anything like that. But the guilt I feel when I realize I haven't given Max the credit he deserves really, really gets to me.

Max still has his baby back teeth. You can bet I'll be putting them under his pillow when they fall out. And you can bet I will try my best not to underestimate him like that again.