My other sibling was a car 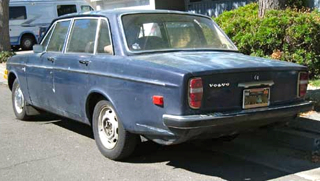 I've been doing a lot of cleaning up around the house this past week. It's part therapeutic, part prep for the task I'll be undertaking next week: Cleaning up my dad's place. I'm dreading it. I'll be with my sister and mom, though, so I'm hoping it won't be as tough as I'm imagining. Not just emotionally, but because of the sheer volume of stuff.

Dad was a renowned pack rat. He liked to buy in bulk—way before there was a Costco—and keep it on hand. He also like to hold onto things for as long as he could, including cars. As I was going through some papers the other day, I found an essay I'd written about my dad's beloved Volvo that I never published; here it is.

Shortly before my little sister, Judy, was born, my dad purchased another child: A four-door 1969 Volvo 144S with a black exterior, cherry-red vinyl seats and a trunk the size of Texas. We grew up together, that car and me, sibling rivals who occasionally competed for Dad's attention.

My father adored that car as if he'd assembled it himself. Every week, he'd pay a neighborhood handyman ten bucks to do a wash and wax ("Those car wash bristles scratch the paint," Dad would solemnly inform me). In the glove compartment he kept a small spiral-bound notepad in which, with every fill-up, he'd meticulously log the car's mileage and amount of fuel purchased—to keep track of how many miles the car got to the gallon. My sister and I fought for the honor of doing the recording.

I typically rode in the front, my sister and mother in the rear. Maybe because I was the more fearless of the three of us; riding shotgun had its stresses. By the time the car was in its teens, it would overheat in the summer, especially when we were in stop-and-go traffic. As we sat there sweating, windows open wide, I'd stare anxiously at the needle on the temperature gauge, silently begging it to say put as it inched it toward the ominous red "H." My father would shift into neutral and rev the engine to release heat; eager to do my part, I'd duck my head to the floor and blow as hard as I could. Lots of times, we had to pull over and wait for the car to cool off as my mother, sister, and I fumed at the injustice of it all.

Sometimes, it seemed glaringly obvious that Dad played favorites. On the day I turned 9, we drove to pick up groceries and he double-parked, leaving my sister and I alone. Suddenly, I was seized by fear that the car might roll away. So I grabbed Judy, dutifully locked all the doors, then zoomed into the store. "Don't worry, Daddy, I closed the car up!" I announced when we found him. He started at me, bug-eyed. "THE KEYS ARE IN THE IGNITION!" he roared. That birthday afternoon, I walked the long mile home.

As the Volvo aged, it grew more vocal. "Find The Strange Noise" become our favorite family car game. Whenever a new sound cropped up, Dad asked that we all stop talking and figure out where the rattle, click or sputter was coming from. I can still picture him now, one hand on the wheel as he leaned out his window, an ear extended toward the front tire. When I figured out the source of the sound I felt damn proud, even if the offender turned out to be a wayward pen jiggling on the dashboard.

One summer, during a road trip, the car began to emit alarming new noises—loud pop!-pop!-pops! that grew stronger every time we drove up an incline. "Everything's OK, don't worry," Dad said. Then the front hood began to spew smoke. Dad pulled over, teasing me and my sister that our collection of comic books packed in the trunk might burn to a crisp.

When he opened the hood, little licks of flame leapt up. He slammed it shut and as I watched in fascination as a sizzling circle of paint bubbled up in the center of the hood and spread out, slowly and malignantly. My father tied one of my sister's white t-shirts around the antenna. Almost immediately, a driver stopped and approached us bearing a fire extinguisher. A "Good Samaritan," mom called him. Dad was grateful to the guy (miraculously, the Volvo started right up again) and unrepentant to us. "The car just needs some adjustments," he said.

On occasion, I was glad for the Volvo. It was wonderfully wide, roomy enough to transport me and bunches of friends to ice-skating rinks or parties, and sturdy enough to stand its ground on icy streets. During the summer, when we were at a bungalow in the country, it brought my dad to us on weekends. I'd await his arrival on a grassy knoll by the roadside; he always honked twice when he was nearing, a decisive "BEEP! BEEP!" that told me he'd soon be rounding the corner.

By the time the Volvo and I were teens, though, my affection for it had dwindled. I'd roll my eyes when strangers inquired about the car, and plot with my sister to leave the locks open so maybe someone would steal it. I almost failed my driver's test because it was so difficult to turn the steering wheel when I was backing into a parking spot. "Awww, they don't make them like that anymore," Dad would say in defense when I'd complain about his difficult child.

By 23 (the car's age, not mine), it was on its last wheel. It sputtered. It went up hills at 10 mph, max. It took forever for the heat to come up. The fatal blow was not an engine attack but a minor failure: The windshield wiper motor wore out and the mechanic told my father he'd have to write to Detroit for a replacement. WIth surprisingly muted resignation, Dad went out and bought a six-year-old gray Volvo 240.

We all worried about adjustment issues, but New Car delighted him with its air-conditioning, sun roof and pickup power. Still, he kept the old Volvo and used it when there was no chance of rain until one day the engine wouldn't start. He tried jumping it via New Car, but the stress made it conk out, too. Clearly, one car had to be sacrificed for the other to live.

Getting rid of a Volvo with 126,372 miles wasn't easy. Dad would have loved the automotive equivalent of a nursing home, where he could pay the Volvo regular visits; instead, he settled for a used-car dealership. One made the insulting offer of a hundred dollars. Dad finally settled for three hundred.

My mother considered writing the folks at Volvo to tell them about the car's outstanding durability.

I sent my father a sympathy card.
Ellen Seidman at 10:00 PM