Children with special needs and speech: "That stinks!" says Max 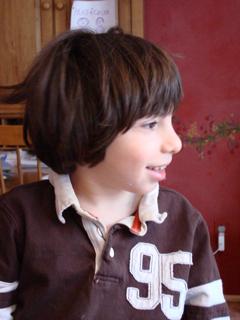 "I think he's going to have speech. He'll sound like a deaf person." That's Max's neurologist talking, about six years ago. I'd asked if he thought Max would ever be able to talk; at that point, Max had very few sounds and no words.
The doctor's prediction came true: Max's speech does sound like that of a person who is hearing impaired, somewhat slow and slurred, although it's typically less intelligible. Except for the word "no." Of course that would be the one word he has mastered. He likes to use it a lot.

At times, when it's just Max and me without the iPad between us, it can get frustrating to not understand what he's saying. Lately, Max has been trying to talk more and more. Everyone's noticed it: his speech therapists, family, friends. Way back when he first got a communication device (a Dynavox), I was concerned it would make him less motivated to articulate words, but that hasn't been the case. Max has plenty of things he wants to voice to the world.

His favorite things to say lately: "I'm Ur-ul Ah-eh-hee Ax!" ("I'm Purple Spaghetti Max!") and "Ax eyes ah-eh-hee!" ("Max likes spaghetti!"). Lately, the spaghetti obsession is rivaling his purple one; the other night, we went out to a Japanese place for dinner and I brought spaghetti with me in a container. "Sorry, pretty much all he eats is spaghetti," I said to the waitress, who smiled and seemed to understand. "Ah-eh-hee!" Max said to her, happily. I teased him about ordering spaghetti sushi. Yum.

Every once in a while, though, Max says things completely clearly, and I'm suddenly filled with hope that his speech will get sharper.

I was in his room this morning. The Diaper Champ we have is a veritable antique at this point, we need to get a new one.

"That stinks!" I said as I emptied it.

I grinned. Max cracked up, very pleased with himself.