In memoriam: for my dad, who loved a good laugh 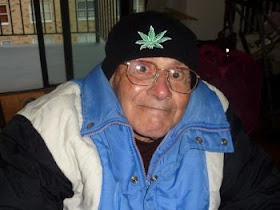 One of the things that makes it easier when someone you love dies is thinking about stuff you used to laugh over together. My dad had an excellent sense of the absurd.

Today, I was remembering when my Uncle Sidney passed years ago. As we left the funeral parlor, the guy who ran it said to my dad, "See you soon!"

We laughed so hard as we drove away.

I'm re-posting "Nice hat, Dad!" today. He laughed when I'd told him what he was wearing, and kept right on wearing it.


* * * * *
I saw my dad on Sunday. He's 86 and a little out of it at times, but he's still plenty smart and generally not doing so bad. Especially considering the hat he was wearing.

"Um, is that a pot plant on my dad's hat?" I asked the woman who helps take care of him.

"Yes, it's ganja!" she said, cheerfully. She's from the islands, so she knows what she's talking about. Seems like she's been wheeling him everywhere in that cap. For a year now.

"Your mother," she said.

I called my mom.

She told me she had a pair of pants to return to some discount-type store; the place wouldn't give her cash, so she decided to pick up a few things instead. Including this bargain $1.50 ganja hat.

"Mom, what did you think that design was?" I asked.

"I thought it was a maple leaf, like on the Canadian flag," she said.

I pondered the hat. What the heck, I thought. I mean, I don't want anyone mistaking my dear old dad for a weed dealer, I wouldn't let my mom buy ones for the kids and I'm not condoning ganja or anything, but there's something to be said about being the hippest 86-year-old in the whole hood.
Ellen Seidman at 6:35 PM