Oprah Your Own Show: the winner who could change our kids' lives 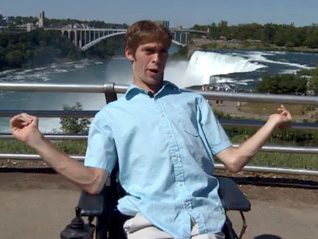 Question: "What do you think is the biggest misconception about people with disabilities?"
Answer: "That they're helpless, and that their personalities are defined by their disabilities. I am so many things before I am a person in the wheelchair. Get to know the person, the chair is incidental."

That's Oprah asking the question. And that's Zach Anner, my American idol, giving her the most spot-on answer. He's one of two winners of the Your Own Show competition, and he'll be hosting his own TV travel show: Rollin' Around The World. Zach has cerebral palsy, and he has given me all sorts of inspiration for Max's future.


I've been at an event these last couple of days, and so I missed the big win last night. Here's the previous episode, where Zach and Oprah chatted. I found her treatment of him patronizing at times—that look of extreme concern on her face, that pat on the hand at the end. And the first question she asked ("What made you want to take this on?") threw me. Hel-lo, having your own TV show? Hel-lo, Oprah backing your own TV show?

Perhaps people will give Oprah props for his win. It's great that she gave all the contestants a chance at stardom, but she doesn't deserve special kudos for choosing Zach. He is genuinely funny and charismatic, and he deserved it. That said, this is groundbreaking, and I hope Zach's show will change a lot of misconceptions out there about people with disabilities—and the way our children are treated by society.

I suspect Max will be sending in his application next year for The Purple Show.
Ellen Seidman at 10:25 PM