Max steps out of his comfort zone (and likes it) 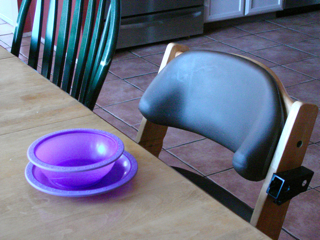 This is Max's table setting. It's a perma-fixture on our kitchen table; he wants it there all the time. He keeps a matching purple bowl and plate on his bed. He sleeps with them at night, and makes sure they're aligned just so.

Max likes the familiar. A few weeks ago, we got a new phone and put the answering machine in our bedroom instead of the kitchen, where it had been for years. Max keeps asking us to bring it downstairs, where he feels it belongs. He also likes us to park in corner spots of lots. He likes to sit in corner tables at restaurants. No, actually, he only sits in corner tables at restaurants, and has been known to stare down diners who dare occupy his table. He waves his hand like a little Napoleon, ordering them to move. This is why we keep going to the same local diner on Sundays, where they save the table in the back for us.

Lately, though, Max is breaking out. This week, his school finally sent home the DVD of him at the holiday show I'd been begging to see; I'd missed it because of work and because every other year, he'd run out of the room screaming. Not this year; he beamed and sang "This Little Light of Mine," holding his mini flashlight. And then he took a bow. And I felt like the crappiest mother of the year for not being there.

Max is daring to try other new things, too. Last week, he asked us to move his chair (it's a Keekaroo) and his environmentally-incorrect tableware to a different spot at the table. He's been begging to go inside stores when we drive by, although they used to scare him. He sat at a new table at the restaurant over the weekend. It was a corner one, but still.

Clearly, the progress of our kids can't be measured by reports, charts or tests alone. It can't just be measured by an increasing number of spoken words or an improvement in movement. Progress comes in all shapes and forms—one song, one bow, one new place at a time.
Ellen Seidman at 7:30 AM