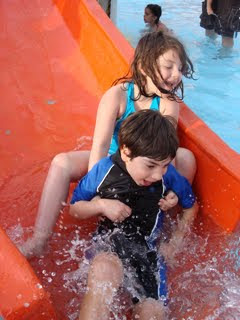 Saturday we were at Sesame Place, along with everyone and their mother. Crowded, but fun! The kids weren't into the character meet and greets, though they loved the water activities, the rides and the big parade at the end, complete with a gigantic plastic birthday cake Max seemed eager to eat. 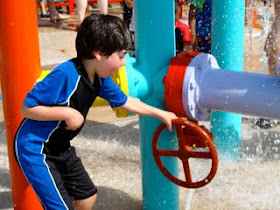 Max's fave was Ernie's Waterworks, especially because he thought a lot of the fountains and geysers looked like a car wash (the obsession lives on!). Afterward, we floated in big tubes along "Big Bird's Rambling River," Max sitting on Dave's stomach, Sabrina in a tube next to me. I couldn't believe it—15 whole minutes of relaxation. 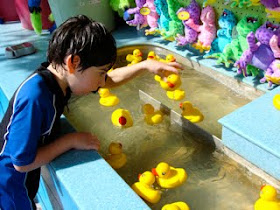 Then Max played the duck game, and attempted to walk off with one, only a Sesame Street SWAT team descended upon him. OK, they didn't. The lady at the booth was very nice.

Actually, everyone at the park was super helpful. At lunch, the cafés were crowded and Max couldn't deal, so I asked a park staffer if there was anyplace quiet to eat. She walked us over to a table at Captain Ernie's Bistro, then had a supervisor come out of the jam-packed eatery, take our order and deliver it. Wow. We were also able to get a special pass for Max, so we avoided the long lines that he can't tolerate. We did wait on the shorter ones; it is a fine line between working with Max's limitations and teaching him that he has to wait his turn, too. 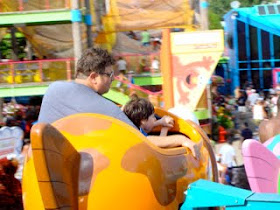 Max and Dave went for a spin. 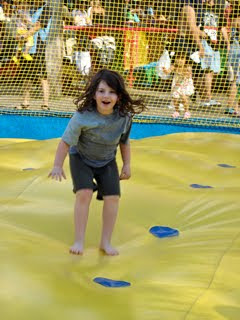 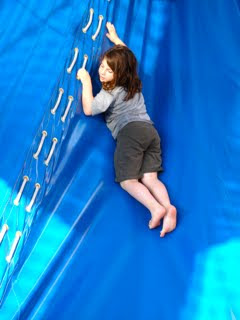 ...then attempted to climb Cookie Mountain. Problem was, I'd neglected to bring along an oxygen tank and proper climbing gear, so she failed to reach the summit, though we might turn her attempt into a major motion picture, I'll keep you posted. 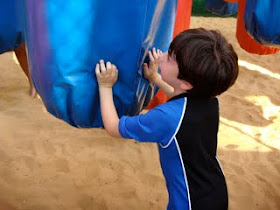 Biggest surprise of the day: Max got in a pit with sandbags, "Monster Maze," and fearlessly pushed his way around. I think he might have a future in boxing. Seriously. Float like a butterfly, sting like a bee, buddy! 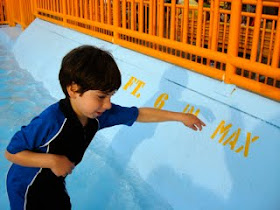 I love how Max recognizes his name. "Why is Max's name always everywhere?" Sabrina wanted to know.

Saturday night, we crashed at the Sheraton Bucks County Hotel, five minutes away from the park. I am a total sucker for sleeping in hotels, always happy to. As with the other major hotels in the area, there's a shuttle bus to Sesame Place so you don't have to deal with parking. Also, the bed was ridiculously comfortable. 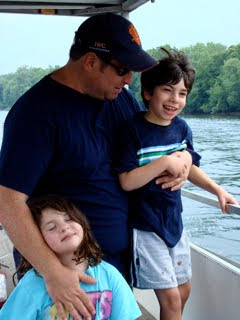 On Sunday, we drove a half hour to New Hope, Pennsylvania. It's mostly an adult place to play (shopping, antiquing, nice restaurants), but we took the kids on a ferry boat ride and they didn't want to get off. 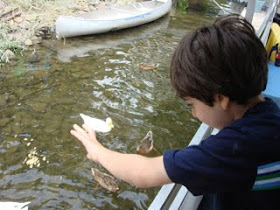 Another great trip, especially because Max was so open-minded about trying new things. It took a little while for him to warm up to Sesame Place but once he did, he was everywhere.

Up next: We hike Mount Everest! Yeah. Actually, next weekend I'll mostly be at BlogHer, a whole other kind of adventure.
Ellen Seidman at 12:20 AM