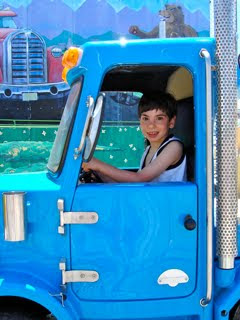 Well, it's back to reality today. Yipppeeeeeee. I don't think it's exaggerating to say the kids had the time of their lives on our beach vacation last week. We were at a resort on the Jersey shore, and we spent a lot of time hanging in the pools.

During our week off, I wanted the kids to really enjoy themselves, I wanted to relax, but more than anything, I wanted to work on something very important: encourage Max to do more stuff on his own. He's pretty codependent on us, more than he needs to be. 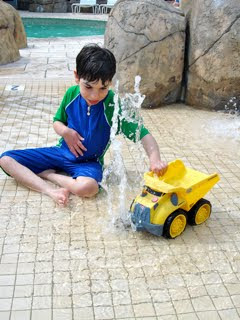 We got him a cute fish tube and he did a nice job kicking around in it. But this pool, with its mini geysers, was where he felt most comfortable. He's been obsessed with car washes lately, and he liked to pretend he was running his truck through the car wash. 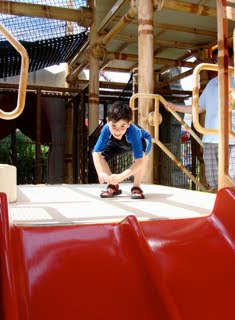 On Tuesday, we visited Six Flags Great Adventure. Max climbed the stairs to this slide by himself (with Dave behind him just in case), then he went down alone. Score! 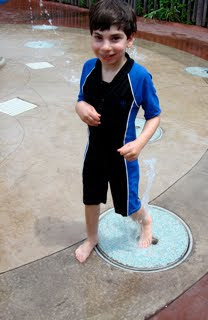 There was a fun little water area, where Max freely splashed around (geysers again!)... 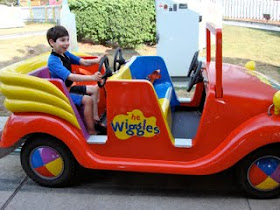 ...and a Wiggles section, too. We were over them as of a few years ago, but Max was still intrigued. At first, he refused to go on this ride. So Dave picked him up and plopped him into a car, anyway. And then, of course, Max wouldn't get off. He stayed on for seven rounds. 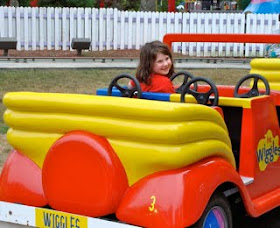 Sabrina enjoyed the ride too. 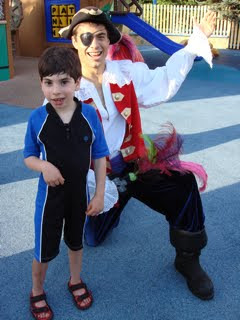 Max and Captain Feathersword. I think Max would make a fine pirate. 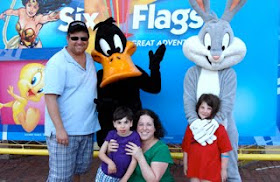 Hanging with Bugs and Daffy. 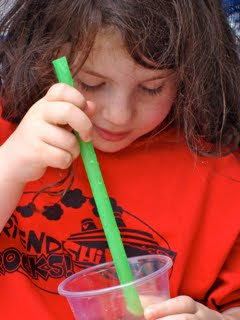 Both kids ate their body weight in ice-cream and shakes this week. Max fed himself on occasion, but likes it best when Dave feeds him. 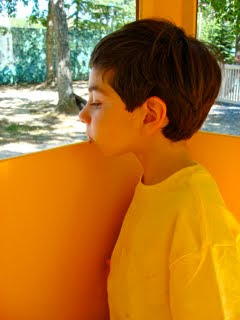 One afternoon, Max and I went to the zoo together. There was a cute little train, and I bought us tickets for it. Only Max wailed when the time came to get on, so I returned them. He kept hovering around the train. I knew he wanted to ride it, but he had to push past his qualms. So I picked him up and carried him on. The whimpering instantly stopped. And when it was over, he asked to go on it again. See a pattern here? 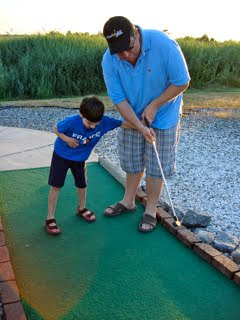 Max especially loved miniature golf. He kept wanting Dave to help him swing, and Dave did, but we also made him try it himself. 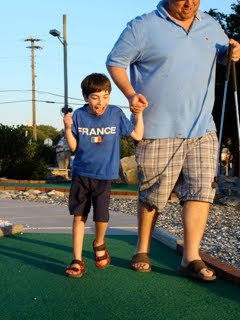 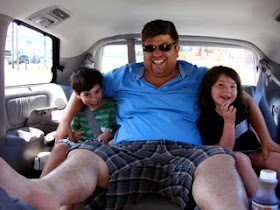 Driving home, Dave and the kids sat in the back seat and pretended I was their chauffeur. "Driver, take me to DisneyWorld!" said Sabrina. "Driver, I'd like a beer!" said Dave. "ARRRR WAHH!" said Max ("CAR WASH!")

It was an excellent week. Max made some progress in terms of independence, but it's a long haul. For years, we have been doing, doing and doing yet more for him, and he's used to that. It's a fine line we walk as parents of kids with special needs, isn't it? Our kids depend on us for so many things. Yet if we don't push them, they won't achieve whatever independence they are capable of (Amalia over at Autisable just did an inspiring post on this).

Max is actually a lot more independent at school and with our babysitter than he is with us. At school, he'll use the potty. At home, he's been refusing (OMG, I have total potty despair). At home, he always walks down the stairs from our second to first floor with our babysitter, holding her hand and the rail. When he's with me, half the time he wants me to carry him.

How are your kids doing with the independence thing?
Ellen Seidman at 12:01 AM