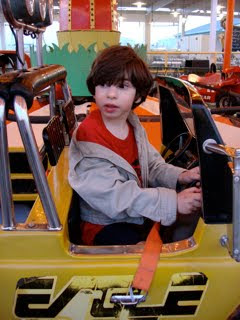 We had such a great time at the beach this weekend that we dragged it out till Monday night, when we hit some kiddie rides because we figured we'd get stuck in traffic going home, anyway.

We go to these rides about once a summer. Last year, Max was very wary of walking in—there's a lot of noise and flickering lights. This year, he went in with just a little whimper. He spotted one car ride he loves, got all excited and went on it for a few rounds. He tried another. Then he was done, no interest in going on any other types of rides, not even the cute airplane one.

Because we visit there annually, I tend to treat it as some sort of indicator of Max's progress. I do the same with holiday meals, his IEPs, school photos. Here's how Max is doing now, this is how he was last year at the time. Sometimes, these are really reassuring, heartening reality checks. Sometimes, I end up reading stuff into them that isn't true. Like Monday night, as I stood there in the twilight with Max in the little car, Dave and Sabrina going on every ride they could, and the squeals of happy kids all around, I got concerned that Max hadn't mentally progressed beyond enjoying the two car rides.

I had a good talk with myself on our car ride home, there was plenty of time for that because of course everyone had the same "brilliant" idea to leave late. Whoa there, I thought: there is no kiddie-ride report card. Get a grip. Right now, Max is just not into anything other than car rides—it's a preference, not a sign of limited curiosity. He also can't get past the hustle and bustle, which has to do with his sensory issues. Other than that, though, his behavior is no real indication of anything.

I thought about all the other stuff Max is doing now that he wasn't doing last year: He has a lot more words. He is able to pretty easily climb up and down stairs while standing upright, if you hold his hand, and clamber up them on his own on his knees and go down them on his butt. His general comprehension is better. He is using his pointer finger for the first time in his life (isolating one finger is a tremendous feat for him). He isn't just eating meals by himself, he is insisting on it. He can pick out letters on a keyboard. He can spell his name. And his cuteness? It has no bounds.

Max did something new in the car ride home last night. He has this habit of turning on the little interior light right above his booster seat. He clicked it on at around 10:00, right when Sabrina and I wanted to take naps. "Max, can you turn out the light?" I asked. "Nooooooooo," he said, grinning. "Please, Max?" He raised his fingers up to the light and held them there. He put them down, then he raised them up again. He smiled an even bigger smile. He was totally teasing me. 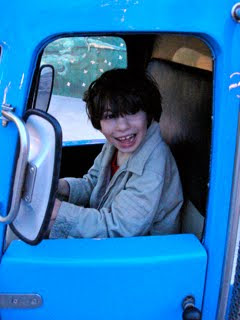