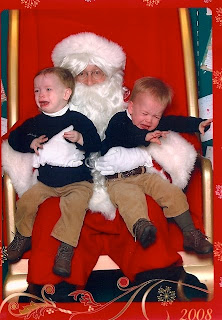 I recently found out that my friend Ellen's boyfriend, Scott, is a Santa. But not just any Santa—he is a world-class Santa, an eight-year veteran at A Major Department Store on 59th Street in NYC. So I got him on the phone, and he spilled.

Me: "What are the more memorable things kids have asked for or said to you?"
Santa: "One little girl asked for a pig. Then there was the kid who said, 'I want a new boyfriend for my aunt!' And one girl the other day, a dead ringer for Eloise, told me, 'My Daddy is coming but he looks like he should be my grandfather, he was married twice before he married Mommy.'"

Me: "OMG! Hey, it's interesting that nobody's mentioning those annoying Zhu Zhu Pets. Who cares?"
Santa: "What are those?"
Me: "My point exactly! So, do kids ever come in with their lists on BlackBerries or laptops?
Santa: "No, no, they still write things out or bring me pictures. Sometimes they'll give me candy, or they try to give me a tip and I'll say, 'Go find someone on the street who's really needy, and give them that dollar in the name of Christmas.'"

Me: "I don't know, I'd take the tip. Kid-ding! OK, got any horror stories to share?"
Santa: "Well, usually an elf will let me know about the next kid coming to see me. So one time, an elf tells me that there's a little boy coming in who's 8 and his parents want me to tell him he wouldn't be getting anything for Christmas cause he's failing math. I start talking to him—has it been a good year for you, what can I bring you and so forth. Then the elf reminds me, 'What about the math?' And I tell the kid, 'So, we're having trouble in the math department. Don't worry about it, you'll never use it, anyway!' His whole face lit up. His parents couldn't say a word."

Me: "Santa, you're my hero! What advice do you have for parents bringing their kids to see Santa?"
Santa: "You never know what's going to happen. Kids may not smile—babies don't understand the meaning of 'Smile!'—or they'll cry. You can't believe the notes kids can hit when they cry! I'll tell them, 'Does the Metropolitan Opera know about you?' A lot of parents come expecting the Norman Rockwell photo, which they probably won't get. But they might get something hysterically funny or very loving or outrageous to send to grandma."
Ellen Seidman at 12:35 AM