Opening our kids' eyes to the world around them 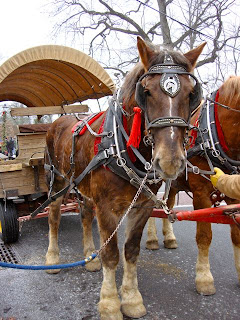 Saturday, our town had an adorable Dickens village set up, with cute mini houses, a petting zoo and a horse-and-buggy ride. Sabrina and I went with her friend Nora from down the block and Nora's mom. 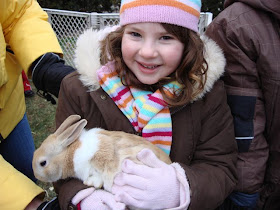 I scoped out the scene and called Dave; I wanted him to bring Max. We both knew Max might wig out at the petting zoo. We both knew he wouldn't want to go on the buggy ride. And yet we knew we needed to take him.

The truth is, it's usually so much easier not to take Max to new places. He gets scared. He gets unnerved. He cries. He wails. But the thing is, if we don't keep trying, he'll never outgrow his anxieties. And his brain won't thrive. On our last visit to the neurologist, he told us to expose Max to as many new places and situations as possible. His words were, in fact, "he needs significant visual stimulation." To help with his cognition, to spark his imagination, to expand his horizons—all that good stuff.

And so, Dave came with Max. Sabrina ended up going back to Nora's house, and that left the three of us standing there and watching people board the buggy, Max peering from behind a bush. 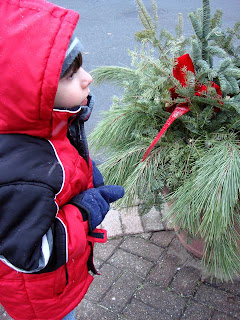 We tried to coax Max into the pen with the bunnies and ducks, but there were a lot of kids in there and he balked. He was mildly interested in the goats, sheep and llamas, though he was very interested in the horse trailer—he kept pointing to the animals, then to the trailer, hoping he'd see them getting herded inside.

I yearned for him to go on that horse and buggy ride, or to play with the animals. I don't want Max to stand on the sidelines of life, watching it pass him by. But at times like this I have to remind myself, yet again, that it's just me projecting my own wants onto Max. For now, he is happy observing. And that's the best we can do for him—expose him to different sights and let him experience them in his own way.

When we got back home, he had a blast running around in the flurrying snow.