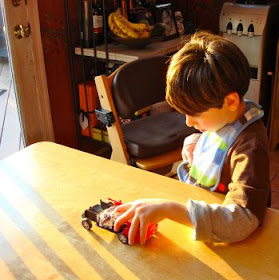 I've been staring at Max's hands a lot lately. They're getting so big. What happened to those pudgy baby hands I used to nibble on? I've also been watching in amazement as his hands do more and more. One of the biggest side effects of the cerebral palsy is that Max's hands are, alternately, either too tight or too loose.

Mostly, they're too tight. His left hand is more functional than the right one (since his stroke was worse on his left side, his right side is more affected). So Max typically tries to do everything with his left hand. "Two hands, Max! Two hands!" I'll say as I watch him struggle to pick up something with his left hand alone. He needs to be reminded to use the right one; it's often held tightly in to his chest, Napoleon-like. A doctor once said it would be his "helper" hand, and it's pretty much true.

Max is able to open both hands a lot more easily these days. He can't quite grasp a ball, but other things, yes. I loved seeing him hold that car above and run it back and forth. Lately he's been maneuvering a computer mouse, too.

Max has never gotten a pincer grasp, the movement that enables a child to pick up something using his thumb and forefinger. It typically kicks in when an infant is between eight and 12 months old. It didn't happen with Max, so grabbing smaller objects—say, a spoon—is tricky for him. But he manages: He'll use a cupped hand to grasp stuff then hold it in his fist. He also has trouble isolating his pointer finger, though he's gotten good at improvising that, too. He uses a knuckle to turn on the TV or push the water cooler button.

He makes it work.

As I watch Max's hands move, I sometimes think about how that's something other parents take for granted—I'm guessing many couldn't imagine what it's like to have a child whose hands can't quite do what his will wants them to. When Sabrina first held a rattle in her hands, I was amazed; I was so used to wrapping Max's fingers around objects for him.

As a baby, Max's hands were so tight and balled up. I remember Dave and I taking him to the mall once and strolling around. Inevitably, we started observing other babies. Especially their hands. "See?" Dave would say. "That baby's hands are closed!" We couldn't accept our reality. Or Max's.

Now I watch Max's hands and I'm filled with wonder that he is able to manipulate them the way he is.

I watch Max's hands and I worry.

But Max? He just does his thing, holding on any way he can.
Ellen Seidman at 12:11 AM