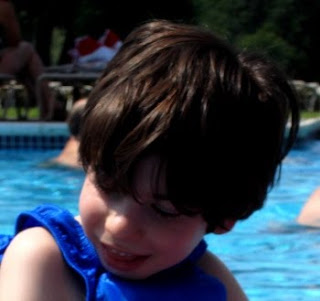 It's getting kind of hard to tell Max and Brad Pitt apart, don't you think? OK, OK, so Max is not going to Hollywood anytime soon, but this was quite the I'm-ready-for-my-closeup weekend

When we were at Duke University for Max's stem cell infusion, a TV crew showed up with the doctor; they were doing a story on Dr. Kurtzberg, and wanted to videotape an infusion. I said yes. It's a TV production company specializing in medical news that creates segments and distributes them to stations across the country. They wanted to get some footage of Max at home, so they came over on Saturday, and Max totally played to the camera. They did an interview with Dave and me, too, and of course I got all teary-eyed. Dave and I did fine, though we had opposite takes on whether Max had shown any improvement from the stem cell infusion. I said I didn't think so (Dr. Kurtzberg said if anything happened, it would take about six months); Dave said he thinks that Max is more alert. That's our typical pattern—I'm pragmatic, Dave is overly optimistic. We balance each other out. I'll put up a link to the segment when it's done.

On Sunday, we got a visit from a photographer, Peter Miller, who works for The Littlest Heroes Project; it's a group of photographers from around the country who volunteer to take photos of kids with disabilities/illness. I think they got too many applications and are currently out of commission—I can't link to their website. Peter was the nicest guy, he even showed up with presents for the kids. He spent close to two hours shooting Max, and Sabrina too. He got some great shots, even a rare one of Max and Sabrina together. She went the diva route; I had to promise I'd take her to the store and buy some pickles (she's crazy for them) just to get her to smile for the camera.

In other exciting news, this weekend I finally organized the house a bit. Organizing is, for me, as good as therapy. I purged our kitchen cabinets, tossing out stuff like pacifier holders (Sabrina's), various bottles of expired vitamins (why can't I commit to taking them?!), and old kiddie dishware. Such a mundane activity, I know, but I felt a lot better with less stuff. We have too much damn stuff. It clutters up our living space, it clutters up my brain. God knows, my brain is pretty packed already.
Ellen Seidman at 12:10 AM