Kids with special needs and their (obnoxious) siblings 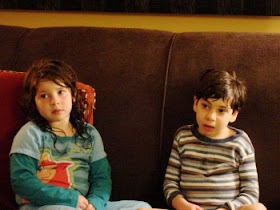 Sabrina is going through some sort of phase. The symptoms are:
• She only wants hard-boiled eggs for breakfast
• She's obsessed with iCarly
• She refuses to wear tights or socks
• She's been requesting "vegetable sandwiches" consisting of bread, lettuce and shredded carrots (yes, I realize this is a Good Thing)
• She has been particularly obnoxious to Max. Like, last night I was putting her and Max to sleep, and she begged for some cheese. I gave it to her, and made her eat it outside the bedroom (where Max was nodding off). Suddenly, she said, loudly, "Mmmmmm, Maaaa-aaaax, I'm eating chocolate ice-cream."

What's up with that torture?

The worst was over the weekend, when she started imitating the way Max talks. We were in the car, Max said "Noooooo" to something and Sabrina piped up with this pitch-perfect "Nooooooo." Then Max said "EEEASH OUSE!" (translation: "Beach house," that place he's obsessed with.) And Sabrina said, "EEEASH OUSE!"

Max started giggling. Dave and I were on the verge of laughing, but we stifled it. I mean, it wasn't funny. But it sort of was funny. I pulled myself together and told Sabrina she was being rude, and that even though Max doesn't talk the way she does, he is still talking. And that she wouldn't like it if someone did that to her.

Tomorrow, I am programming Max's speech device with three new words: "CUT IT OUT!"
Ellen Seidman at 12:05 AM