Will she stick up for him? 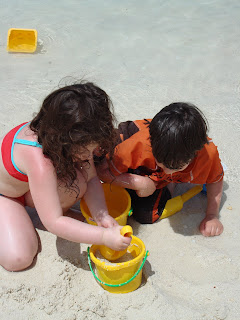 Like many siblings, Sabrina and Max have a complex relationship.

She loves him fiercely. When we were on the Disney cruise and left the kids in the playroom, she'd stick around Max and make sure he was doing OK, sometimes keeping a protective hand on his back. At the beach recently, all she wanted to do was write "Max" in the sand over and over and over again. And today she asked if she could marry Max when she grew up. When I said no, because sisters and brothers don't marry, she said, "OK, you marry him."

But then, they fight and pull each others' hair. And Sabrina cannot stand it when Max touches any of her stuff. You may have heard a very loud scream the other day emanating from somewhere in the Northeast; that was Sabrina, losing it when Max innocently laid a hand on a Princess Ariel vanity table we got from a neighbor.

A few days ago, she had a playdate with another little girl. They were hanging in Sabrina's room, and Max and I walked in and he said "Hi!" to the girl. "I don't want to say hello to Max," she said. "I don't want to play with him. He drools."

A look of concern flickered across Sabrina's face.

"I don't want to play with Max, either," Sabrina said.

That's the sound my deflating heart made.

I didn't force the matter and simply said, "Let's be friendly, girls. Max just wanted to say hi!" They went about their business, Max and I left and hung out.

It's the first time anything like this has happened. Later, I said to Sabrina, "Max is your brother, and you should always be nice to him. So if another kid says she doesn't want to play with him, please don't say that, too. It could hurt his feelings."

She didn't respond, though as always, I knew those wheels inside her head were turning and she understood. 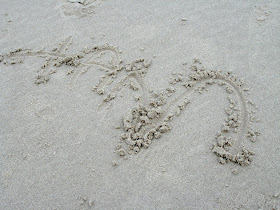