Another guilty confession, with a happy ending 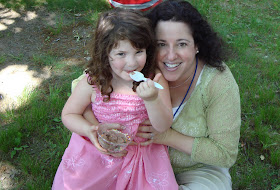 This weekend was my college reunion, I'd been really looking forward to it. Only Max was under the weather, so he ended up staying home with Dave and Sabrina and I did the four-hour drive Saturday morning.

I can't lie: It was a relief. I knew Max wouldn't love the loud band that was going to play at the BBQ (I'd called ahead and asked about the noise level), the endless photo-taking, all the people milling around. Even Sabrina, usually unflappable, burst into tears when I spotted a long-lost friend and screeched, "OH MY GOD, IT'S ALYSSA!!!"

So, of course, driving up all I felt was guilt, guilt, guilt. Then I called Dave, and heard a lot of background noise. "Where are you?" I asked. He and Max were at an amusement park. "Isn't Max not feeling well?" I asked. "No, he's having the time of his life!" Dave said. I called again a few hours later. Again, lots of noise in the background. "Are you still at the park?" I asked. "No," said Dave, "we're at White Castle eating cheeseburgers." I called back a few hours later. This time I could barely hear Dave. "WE'RE AT OUR BLOCK PARTY!!!" he shouted into the phone. "MAX IS JUMPING AROUND IN THE BLOW-UP BOUNCY THING!"

My boys basically partied all day long. It's a wonder they didn't go to Hooters that night.

Meanwhile, Sabrina and I had a wonderful time: We had hot dogs and ice-cream sundaes, painted pictures and made sand sculptures, stayed at a good friend's house whose kids have maybe every toy ever created.

In the end, it was a happy weekend for everyone.

It's funny, you spend so much time trying to make sure your child with special needs is included in things. And then, you leave him out of something—because he won't like it, because it's the right thing to do, or both—and suddenly, you're ridden with guilt. Though I know leaving Max at home was the best possible decision, in the end.

A vaccine against the swine flu would be a wonderful, but someone really needs to create an anti-guilt vaccine. Sign me up! 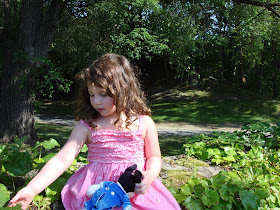