I love it when Max plays alone 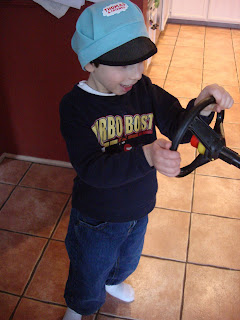 Lately, Max is most happy behind the wheel, driving his imaginary car all around our first floor and wearing this Thomas cap from an old Halloween costume. We found the wheel in our backyard once the snow melted, I think it fell off some outdoor mobile we stored away. It's his new most favorite toy ever. Sabrina, meanwhile, just wants to play with Dave's iPhone. She thinks it's hers. Oh, and by the way, she's now using the "You're not going to go on the Disney cruise" empty threat against me. I told her to quit picking her nose the other day and she said, "That's rude! You're going to stay home all by yourself when we go on the Disney boat!" I actually thought letting Dave take the kids alone wouldn't be such a bad idea.

It thrills me that the kids are able to entertain themselves. Especially Max. For many years, I had to encourage him to play—he never did his own thing. But now, he's got his dream car (it's a Porsche Boxster, I assume), he's got his real cars and trucks he likes to crash, he's got his musical instruments he likes to bang and sing along to. He's even turning on the iPod docking station by himself. Now, if I could just train him to record The Office on the DVR, that would be stellar, because I keep forgetting to do it.

Max is still dependent on us for basic needs like being fed and changed. It is beyond heartening to see this independent streak emerging. Not to mention, cute. 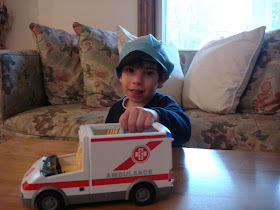