How much do you trust doctors? 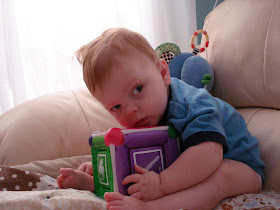 The post I did a couple of weeks ago on good doctors vs. bad doctors stirred up a lively discussion. Katy from Bird on the Street, mom to impossibly adorable Charlie (see?), had more to say on the topic, so she's today's guest poster. Happy New Year, all. I hope it's filled with happiness, health and lots and lots of progress for our kids.

I think that most of us grow up thinking that doctors are all-knowing. If we're sick, they make us better. They heal us. It's hard not to be in awe of people with that kind of power.

The truth is that most pediatricians have it easy: strep, ear infections, and childhood vaccinations are all pretty easy to handle. Things like brain damage are a totally different story. There is little black and white; brains are plastic and there's no telling what one will do.

So how much do you trust the doctors who monitor your child's brain? For me, my respect went out the window on the second day of Charlie's life. The doctor predicted that he would have "no brain wave activity." He said that he would do the EEG again in eight hours, but his prediction was that Charlie was brain-dead.

Guess what? He wasn't. Not even once. While not normal, Charlie never failed to show brain waves.

So I take what they say with a grain of salt. Doctors have to earn my respect—I'm not handing it out for free. I am a big fan of Charlie's current neurologist and I feel like she respects me and my decisions. I ask a lot of  questions, though. I spend  time considering the choices I make. I decided to hold off on vaccinations until Charlie's second birthday (which will be here before I know it) because I wanted to protect his already-assaulted brain. I decided I didn't need an MRI of Charlie's brain or a visual evoked potential test because neither could tell me much about his future or his abilities. It felt like excessive testing for the sake of testing. This is not to say that I don't trust his doctors. I do. But I am the running the show and I'm not going to let someone tell me how to take care of my child. They have lots of patients and I have only one.

So how about you guys? Do you trust your child's doctors implicitly?